So, tell me. How did you spend your summer of 2003? One of the hottest (at least for us Europeans) since records began?

Well, lucky you. I spent mine in hospital. All two months of July and August, some of the most beautiful weather I've ever experienced. And I missed it. Well - not exactly missed it because the place didn't have air conditioning. And we all suffered in there!

So when I was discharged ("He wasn't discharged, he was expelled" - ed) I finished off my University assignment and then went down to my farm in France. But I was clearly not well. A week later, I was back in Brussels, a good few weeks earlier than planned.

Then my niece Rachel came to the rescue
"Why not come over to Canada and spend some time with us?"
That was a nice gesture and much appreciated, and off I toddled to the travel agents.

And Connections did me proud. A couple of weeks later, mid November in fact, found me at Heathrow once again. Summer holidays in November and December! 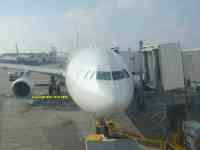 I'd caught a flight from Brussels Zaventem to Heathrow earlier that morning - not that I've forsaken Ryanair but I wasn't up to lugging around my large suitcase on a bus from one airport to another after the events of last year, so I took a direct flight for a change. Going via travel agents it may well have cost me a few Euros more but I tell you what - the absence of stress made it well worth while.

I had plenty of time to hang around and see what was going on at the airport, and have a good look at them loading up the aeroplane that was going to take me to Toronto. If you've read the accounts of my previous voyages, you'll know that I'm not a very good traveller by air. This time was no exception and sitting there for an hour or two looking at them playing with the plane did nothing to calm my nerves. I just wish that the time would pass quickly and we could get under way.

So here I am in Toronto. I've never been here before. 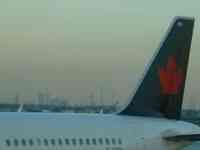 Although I had a four-hour wait for my flight to Fredericton, it was not worth taking a bus into the city for a quick tour. Four hours passes really quickly when you're enjoying yourself, and with it also being the evening rush hour I didn't fancy the risk of being stuck in the traffic and missing my connection.

I contented myself with a long-range shot of the city centre hoping to get a good picture of the CN Tower. It's 553.33m tall, which at that time was the world's tallest structure. If you click on the thumbnail on the left to see the enlarged photo, you can just about make out the tower just to the right of the copyright logo. It's not come out all that well unfortunately but don't worry - I'll be back.

If you want to, you can read some more about the CN Tower - otherwise you can stay with me.

And what other claim to fame does Toronto have? Yes, it's the home of Rush

, one of the finest rock bands in the world. 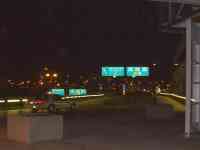 I had plenty of time to kill and you can only do so much at an airport. So I had a plate of chips ("fries" to you Transatlantics) and then took myself off for a walk. What surprised me was that given the heightened state of security there is these days with all of this terrorist paranoia, I could freely pass in and out of the airport without too much inconvenience. Obviously the Canadians don't believe this terrorist nonsense either.

I walked to the end of the footpath (not far, I can tell you) and took a quick photo just to prove that I had been here. You can only walk so far at an airport - they're not really made for pedestrians. They seem to want everyone who doesn't have a car to come by bus or taxi. 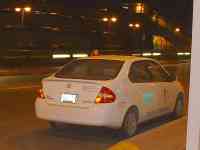 On the way back to the terminal I had a lucky find - a Toyota Prius.

For those of you who don't know what a Prius is, it's a hybrid car similar to the Honda Insight I saw in Laramie in September 2002.

Obviously it's much more complicated than that, but they reckon you can improve your fuel economy by 150% with a car such as this.

Now many people criticise the North Americans for their profligate and wasteful lifestyle, but I have to say that in Europe I had never seen an "Insight" or a "Prius" by the time I was writing up my notes. Yet within two days of being in the USA last year I'd seen the Insight (and in an isolated rural part of the States too) and I'd seen the Prius within two HOURS of being in Canada.

Anyway, after all of this, it was time to catch my plane to Fredericton. Darren and Rachel were meeting me there.

BACK TO THE FAMILY

I spent two weeks with Darren and Rachel, as well as Zoe, Hannah and Amber. We did lots of things and spent some real quality time together. Darren took me for drives around the countryside while he was delivering corn meal, and Rachel took me on shopping excursions. With Zoe and Hannah, I went for some nice long walks in the snow.

The time flew by, which was rather unfortunate. I can stay here forever. But I had things to do, places to go, and all of that. And one of the places I had to visit was Fredericton.

I'd planned a little holiday treat for myself. Nine days with a hire car for touring around the Maritime Provinces. I reckoned I could just about fit it in before the weather truly broke. It was already freezing cold and I was sure that the first snows of winter weren't too far away.

Rachel drove me to the airport, for which I was extremely grateful.