Here I was - off work due to ill health (it was the third month, in fact) and I was at home, fed up, and feeling depressed. So to cheer me up I decided to go off and meet people. And what better place than the USA. You're never alone in the USA as you always meet people who are friendly and talkative. So when I heard of a biodiesel course not far from Loveland, Colorado, I was on the next 'plane.

And here you are!

And here I am - Gatwick Airport. 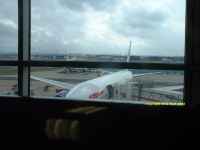 And dead lucky I am to be here too - seeing as how I was arrested at Charleroi Airport! It seems that there was a question of an unpaid motoring fine going back to 1994, and in my absence I'd received 7 days in taule without the option. Trust them to have picked up on it at this particular time. Blast them!

With appeals from Ryanair "will passenger Hall please report straight away to ...." ringing around the airport we settled on a cash payment of €280 and I ran like hell for the plane to Stansted. I tell you what, the Ryanair air hostess on the gate as I dashed through it - dunno which charm school she went to but I won't be sending my children (if ever I have any) to it. It must have counted Alan Klein, Josef Stalin, John DeLorean and Bomber Harris amongst its former pupils.

And when I got to Stansted and onto the bus that would take me to Gatwick, the flaming driver didn't know the way and got lost at Heathrow. Then a girl who had fallen asleep on the bus suddenly woke up, realised she'd missed her stop, and persuaded the stupid driver to take her back. Uproar and riot on the bus. There are other people on the bus with their own timetables too. If it had have been me in charge, I'd have turfed her out to get a taxi for her stupidity. There were plenty driving by.

Believe me, we were all sweating by the time we got to Gatwick. But at least it didn't leave me any time to think about this 10-hour flight that I was going to be stuck on!

And damn and blast British Airways too! After me swearing blind I'd never ever fly with them again after they forgot my vegan meal both ways on my flight to Canada, here I am on a British Airways flight again and guess what? That's right - they've forgotten my vegan meal.

After the "frank exchange of views" I had with the air hostess they won't flaming well forget my meal on the way back!

ha ha ha.
Would you just believe it


I absolutely hate flying - I sit gripping the edge of the seat for the entire flight. It doesn't take very much (unfortunately) to upset me once we're in the air. Especially when there is food involved. 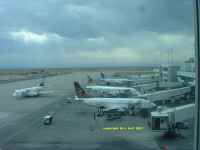 So here I am (eventually) in Denver. No-one hijacked the plane, set fire to their shoe, was sucked down the toilet or had air rage on the way
No shipwrecks and no-body drowndin'
in fact, nothing to laugh at at all!
and it was nearly a 10-hour flight. I was exhausted when I arrived.

So off we trotted to the arrivals lounge and the 90-minute wait to pass immigration. Contrary to what the weather looked like, we didn't have a storm - at least, as far as the weather went. Several passengers were, shall we say, quite - er - expressive about their sentiments after this incredible wait. Not me, though (of course). It's already touch-and-go that they let me into the States so I prefer to wait until I'm safely in before I start drawing attention to myself. "Ippy Zippy!"

Nevertheless, I must be on some database somewhere. I was alerted to this by the immigration man
"Welcome to the USA Mr Hall. For what purpose are you here?"
"I've come to participate in a convention given by Solar Energy International"
"I've never heard of them"
"They're in Carbondale, Colorado. They're one of the largest groups of alternative energy practitioners in the world"
"You see, Mr Hall. Not everything in the States is all bad"
Now I have never ever said it was, but I was puzzled as to why he would make such a remark, unless something has primed him to do so. Something like a database entry that comes up on a computer terminal at his desk when he scans my passport.

Anyway, that was that. Let loose amongst the poor unsuspecting Americans to wreak havoc and mayhem.

The rental car - a Pontiac Sunfire. Cheapest rental car in the USA. Except that it wasn't. But fair dos to the man at Alamo. 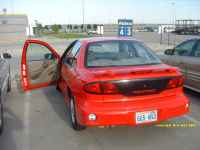 "Today, I can offer you a special upgrade from Economy to Family - only 5 dollars a day".
"No thanks - an Economy's okay"
"But you'll be ever so cramped in an Economy, you know".
"It's okay - I'm not going far and I'll be okay".
"But there"s no air conditioning or electric windows".
Hmm. Bet you anything you like they don't have an Economy so they'll have to upgrade me free to Compact. He's just trying to get some money out of me anyway
"No, honestly, a GEO is absolutely fine and I really won't have a problem. Honestly!"
"Well, I'll tell you what. I'll give you a free upgrade to "Compact" then".
Tee hee
And that was that!

Now, in all the indices you will stumble across, you'll find a page called "arrival", which links back to this page. It was only after so naming it, that something occurred to me. Those of you who know your music will remember the group "Arrival" who featured the charming, delightful Dyan Birch (later of "Kokomo

And so this story is written, too. I hope you enjoy reading it as much as I enjoyed travelling it.

So, to follow this story chronologically, you need to go to Cheyenne.

So, more importantly, what was the music?

Well, not to make the same mistake as I did when I went to Canada last year, I copied a load of tracks onto writeable CDs (and to be on the safe side, took a portable CD player just in case). So we ended up with

and probably half a dozen more I've now forgotten. Surely I must have taken some Hawkwind!

WE GO HOME ON MONDAY

Right, so now I've made it back to Denver after all the excitement, and the Mustang has been handed in. Only a day late, so it seems. That was bizarre. When I arrived home I checked my records, and they were right. How come I'd decided to turn in the Mustang one day short? I don't understand that!

Even more bizarre was that as I was turning off the Highway to take the road up to the airport, Pete Frampton suddenly started to sing
"We go home on Monday, and I want to tell you, I've really had a gas this time - yes we've really had a gas"

Now if there's one moment that has to stand out in the whole of this journey, it is the moment that I was thrashing down the Slumgullion Pass in the Mustang. For no apparent reason, the song "Highway Star

" came into my head. 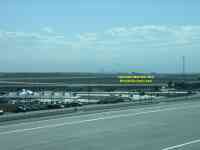 In the distance just here is a final glimpse of Denver. Compare this with the photo of my arrival - bit of a difference, isn't there? I wish it had been like this when I arrived.

But no amount of nice weather and sunshine could disguise just how unhappy I was right now. I'd had the best time of my life this last 19 days and even today as I look back on the photographs, I can still remember the excitement of the discoveries I had made on my journey. Now I was going back to that unhappy and miserable place called Europe, Belgium, Brussels, the EU etc etc. What does it take to get me to stay out here? 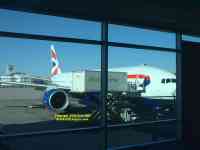 Here's Blitish Airlays loading up my plane with food. I'd better get my vegan meal or there WILL be trouble this time. Waiting however wasn't unpleasant, with coffee machines and so on in the vicinity. Not at all like Montreal Dorval, which was the most stressful airport I've ever flown out of.

But my tranquil state of mind didn't last too long!

Yes, sure enough, I got my vegan meal, and when I was halfway through it, I noticed that the cake I'd been given, with its little "British Airways vegan meal" sticker, contained eggs! Well, that was that! I'm a nervous passenger at the best of times, and the way I've been treated by British Airways pushed me over the limit. Four times I've flown with them, and three times they forget my meal and the fourth time they give me eggs. Needless to say, BA hasn't heard the last of this! 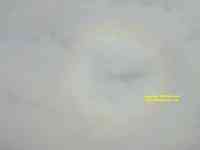 Here's a photograph which, if you look very carefully, you can see a prism of colours with the shadow of the aircraft in it. I'm surprised I could take this photograph, seeing as I can't usually bring myself to look out of the window.

Eventually we landed at Gatwick, and I caught the bus to Stansted, for the plane to Charleroi and then the bus home. I'd come to the conclusion that this was a stupid way to travel. I'm never going to do this again. Not that I've any problem with Ryanair but I'm loaded to the gunwhales with these enormous heavy suitcases and I'm really having to struggle with them, changing from plane to bus to plane to bus. This is just crazy. Badger this for a game of soldiers. Next time I'm going anywhere, I'm going to book the journey as one item and leave the airline companies to maul the luggage about.

And I'd been only 15 minutes on the bus out of Gatwick when it hit me. And all the enthusiasm drained away and the depression sank onto me again, and it was like I'd never been away at all.