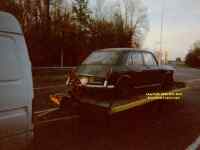 This is in fact a Vanden Plas Princess 1300 that I found it at the back of a body repair shop of a friend of a friend in the suburbs of Asse, on the outskirts of Brussels, Belgium. It has Belgian plates and is "left-hand drive". It's approximately 1973 vintage and is that horrible metallic bright green colour which was common at the time and which I find revolting.

It had been down the bottom of this yard for absolutely years and that was really a shame. It's in desperate condition, but nothing is impossible.

Anyway, I certainly couldn't leave it rusting there like that. I paid £100 for it and gave it to my then - partner as a Christmas present in 1997, as she had liked it so much when she had seen it.

When we separated, she left it behind and despite my asking her on several occasions she never came back for it.

Possession being nine points of the law and all that, ... 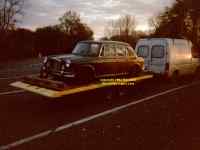 In November 2000 I had to move it from Brussels to my farm in France, as you can see. You cannot imagine how heavy this car is, yet I had to move it and put it onto a trailer, then unload it at the other end, all by myself.

When you consider that it has a collapsed left rear suspension, that is no mean feat. Consequently it has a scratch on the rear wing, a dent in the front left door, and a broken rear windscreen that it didn't have before. Quite a shame really, but at least it's better where it is rather than suffering the same fate as the Acadiane did.

I hope the photograph of it in the sunset is not a premonition.

Now, it's been parked up on the farm ever since, and I haven't really had too much time to do anything at all to it.

But I had the most amazing surprise in August 2005 when I was poking around McGuinness's scrapyard at Longport, Stoke on Trent. There at the bottom of the yard was a BMC 1300, very much the worse for wear and looking like it had been the donor car for someone else's project. Many of the bits had disappeared and most of the rest had been smashed beyond repair. In fact the only bits that were of any use and worth taking off were the front left door and the rear windscreen.

Needless to say, they aren't there now. In fact they're here in my garage downstairs.

By the way, please excuse the grotty photographs. They were taken on a throwaway camera in November 2000 which I found when I was tidying up a box of bits and pieces in January 2003.