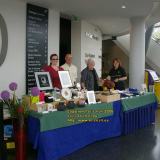 One of the reasons for being in the UK was to assist at the Open University Graduation Ceremony in Gateshead. After six years of struggle for a part-time degree, balancing work commitments, family life, and advancing age, graduating Open University students deserve all the congratulations they can get.

I'm proud to be associated with the fundraising efforts for OUSET and willingly give of my time, even though there are some on the Open University Students Assciation Executive Committee and within the administration of the Association who hate me so much that they refuse to even ask the University to award me the approved expense allowance, even though one of the places approved by the University was vacant. But at least I was able to spend a day in the pleasant company of (from left to right) Kerrie, Kim, Tina, Strawberry and Liz

This is one of the nicest spots that I've ever slept in. It's in a small village called Overton, along the Lune Estuary between Morecambe and Heysham. Taking this photo, I was standing on what passes for the sea wall around these parts. Behind me is a marsh that floods at high tide, and the road upon which I'm standing goes out to Sunderland Point. You can actually drive along it when the tide is out.

It's reasonably sheltered so you miss the full force of the gales that frequently blow around here, but my advice is not to park too close to the trees. When the wind does get up, the branches banging on the van make one hell of a noise. And when I was sleeping here, it was the windiest day for months.

No public conveniences around here though, so you'll need a plant pot beichstuhl. However, just across the road is a public house, which some of you might find useful.

Now tell me, what do you make of this sign? I dunno about you, but my imagination is boggling and I can conjure up all kinds of exciting suggestions as to what is implied here. I really ought to have one of these "answers on a postcard" type of things for the most interesting answer.

The sign is actually in Overton, along the Lune estuary downstream from Morecambe. Eerily, it is situated not too far from the Heysham Nuclear Power Station. Surely they can't be ... er ... well ... can they? 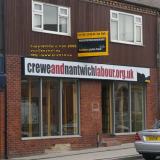 Now this is what I call an apposite photograph. As many of you know, I'm heavily into symbolism. And many of my photos are full of symbolics. And some are just sym, while the rest are just ... er ... quite.

And this is symbolic of the rout of the Labour Party in Crewe and Nantwich - the whole political machine run out of Crewe by the electorate p155ed off with 42-day detention, the abolition of the 10p Income Tax rate, and the forthcoming abolition of Planning Consent for projects with government approval.

Now if only everyone else in OUSA would just listen to me and start bombarding their MPs' surgeries, party headquarters, official visits and the like then we could run the rest of the badgers out of town too. But as long as we are "blessed" with a Rabble Without A Clue running what has turned out to be a woeful and lamentable "campaign" against the wrong Government policy, then don't hold your breath for any important development any time soon. The UK is blessed with the most unpopular Government in its history, and there's not a single person in OUSA prepared to make those bustards sweat.

One of the places that I visited during my happy meanderings was Nantwich, in South-West Cheshire. This is where I went to school, and it's where I have my UK bank accounts. So what with one thing and another I always end up loitering around here.

I'd actually had an appointment here at the bank today, but there was another reason for coming. In a library book sale in Hawick back in April I'd bought a book entitled Time To Leave The Ploughshares

, which recounted the story of one particular artillery battallion in the latter stages of World War I. 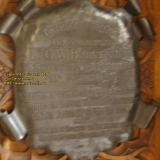 One event that it recounts is the story of an artillery barrage between the authors battery, a neighbouring British battery, and some German heavy artillery batteries across the valley between Arras and Amiens in April 1918. The British are totally outgunned and so the gunners seek shelter, but Lt Acting Captain G W Harvey, in charge of the neighbouring battery, stands up and urges his men out of their shelters to rally his men to the guns for one last stand and a German attack is consequently repulsed.

Right at the end of the engagement, Harvey is killed. His body is later recovered and buried in a cemetery near Arras 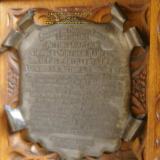 The author of the book writes that "a few years after the war I was in Nantwich, and visited the parish church to see the plaque to his memory".

I reckoned that I would do so too, and after a great deal of searching by myself and a steward of the church, we discovered the plaque, attached to the altar screen that you can see in the photo above. The story is that his family bought the altar screen in his memory, so that gives you some idea of his family's standing in the community.

I recall from my days in Nantwich in the late 1960s that a family by the name of Harvey ran the town's tannery, so I wonder if the deceased was any relation to them. I can see that I'll have to come back here again. This research thingy is getting to be quite addictive.

On the 25th of June I was camping on Scotch Corner near Darlington. While I was typing my blog, there was still some light in the sky, even at 23:45. The next night I was camped on the Northumbria coast at Cresswell, near Amble. Just for a change the sky was really clear so I set up my tripod and just at the point of midnight I took a photo on a long automatic exposure.

I'm really impressed as to how it's turned out, and you can get a really good impression of just how light it was at midnight that night.

Talking of camping on the Northumbria coast, you can see in this photograph exactly where I was when I took the photo above. It's at a small village called Cresswell not too far from Ashington. You have to admit that it's a terrific place to spend the night - one of the most spectacular that I've ever stayed. The sea laps at the foot of the cliff about 50 feet right below where Caliburn is parked, and there's a superb view across the bay to the northern Northumbria coast.

There's a waste bin or two here, and also a couple of wooden benches and tables to sit while you eat. No toilet, but if you don't have a plant pot beichstuhl handy, there are some publics down the hill, or you may be able to use the ones at the caravan park just across the road.