Wendy was responsible for organising the Students Association stand at the Open University graduation ceremony at Harrogate in April 2008. She was rather shorthanded, and seeing as yours truly was at a loose end in the vicinity I was volunteered by Carole and Adrian.

The purpose of the stand is to sell graduation ceremony souvenirs - tee-shirts, commemorative plaques and the like. And all profits go to OUSET - the Open University Students Educational Trust.

There is plenty of financial assistance for students who are in straightened circumstances at the start of their studies, but there seems to be nothing for those who fall on hard times during their course. This is the purpose of OUSET, to raise money to assist such students, and the members of the Students Association occupy themselves with fundraising.

As well as being absolutely perishing cold, it snowed most of Sunday coming back from the graduation. And this is the sight that greeted us on arrival. Caliburn and Adrian's car all plastered with snow.

Not very much, you might think. But this is the Scottish borders and it's nearly the middle of April, dammit. They are playing cricket just down the road from here at Carlisle this time of the year. It brings a whole new meaning to the term "whites".

This is the view down the road in the general direction of Newcastleton.

I've no idea the name of this hill in the distance, but Carole will know, as it's just over the road from where she lives.
"It's called Arnton Fell, Eric"

It's quite an impressive peak as you can see, and even more impressive is that behind it is situated Riccarton Junction. That is an isolated railway junction closed in the late 1960s when the Waverley Line was closed. There was a small village there, totally isolated from the road network and the only access was by train.

I took some pics of what's left of Riccarton on a couple of occasions that I've been up there with Carole and Adrian, and you can see them here.

At the back of Carole's is another range of hills that cut off this area from the Langholm Valley route of the A7 between Carlisle and Hawick. I had a wander through the forest (where the trees have leaves of prisms that break the light in colours that no-one knows the name of

) and poked my lens through the trees.

You can see just how dreary the sky was with this weather. It really looked like we were to be in for a long session.

Carole helps run a traditional music festival here in Newcastleton, and if I'm around I usually end up getting myself roped in to something or other. This year, it looks like I'm general handyman.

The signs have been up for quite a few years and are starting to look their flaky age, so some rigidity was called for. It was hard work doing it without much in the way of tools, but this will do until I come back later in the spring with the right equipment. 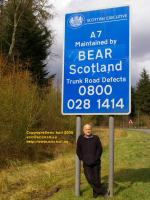 Now in certain quarters I have a certain nickname. And not because I'm brown, furry and cuddly, but because of a famous typing error when someone wanted to call me "dear".

So when I saw this pic, I couldn't resist asking Carole to take a quick photograph of me with it. That's because the person concerned is an avid reader of my website.

One night while I was on my travels, I stayed at the Travelodge at Seaton Burn, just outside Newcastle upon Tyne at the A1 exit. Well, sort of. Caliburn and I actually slept on the carpark outside.

There are some nice big skips here, ideally placed for us to tuck in behind so that we are out of the way. 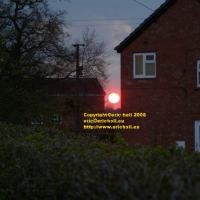 I was round at Caroline's in Congleton one evening, and we decided that we'd go to Sandbach for a pizza. Heading due west, like you do, we were blinded by one of the most magnificent sunsets I have ever seen

A handy bus layby gave us a place to park, as I couldn't resist taking a photograph of it. it really was superb. 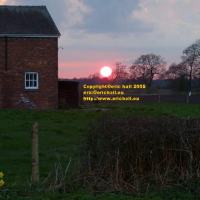 Just as it was setting, it transformed itself into a huge orangy-red orb, and then gently slid below the surface as you might have expected a sunken ocean liner to.

It's a shame that the photographs can't do the sunset justice.

It's funny, you know, how you can go for days without anything exciting happening, and then you get other days where a whole string of events takes place.

A couple of hours after taking those sunset pictures, I pulled into Keele Services on the M6 to post them on line. But no sooner had I applied the handbrake when a squealing of brakes told me that there was about to be something dramatic occurring.

Of course, the SD card was not in the camera but in the computer, so by the time I'd put it back, I'd missed all the action.

Now the entrance to Keele Services southbound is rather peculiar. You drive up the slip road and you can see the car park stretching out for miles ahead of you. But as you breast the brow of the hill, you suddenly notice the sweeping high kerb that directs you in a sharp left-hand bend and protects the cars in the car park from onrushing vehicles.

So if you come up the slope too quickly in the frosty small hours, and suddenly come across the kerb, there's a big tendency to panic and slam on the brakes instead of decelerating with the exhaust brake or electtric retarder and trying to steer round the corner.

The resultant screech of the tyres as the trailer pushed its old Foden tractor unit out of the way was what had warned me of the impending disaster. And the loud bang as the whole lot collided with the kerb and pushed the tractor unit onto the grass bank and into the tree underlined the whole affair.

But if there hadn't have been a high kerb and a tree this would have been all across the car park.

A short while later, I went to have a chat with one of the police officers who had been called to the scene.
"Driver error" was what I was told
"Can I quote you on that?"
"No"
"Ok"

I told you earlier on that I had an alter ego in the person of the legendary and world-famous Strawberry Moose. Well, Liz Ayers, my glamorous assistant also has an alter ego who goes by the name of Batty Bat.

So in homage to the aforementioned, I took this pic while I was wandering around Bangor, North Wales, while waiting for a football match to kick off.

Liz Ayers and I were down in London towards the end of April - I was doing some more research into the Tay Bridge disaster - when we received a phone call.

The London Regional Forum of OUSA, the Open University Students Association, was having a training day for Conference, and what with one thing and another there was a shortage of experienced delegates. So we were summoned to attend. invited to attend the meeting for training the London delegates to the OUSA Conference. Apparently what with one thing and another, and for one reason or another, there was a lack of experienced Conference attendees in the London Region. And what with me being in Kew and Liz being in Richmond yesterday, we were gratefully seized upon to give the delegates the benefit of our experience and advice for Conference.

A gathering such as this can only be graced by the presence of fine, noble characters. And as well as yours truly, the famous and legendary Strawberry Moose was in attendance as you can see.

A great deal of work was accomplished, ably recorded by Maz, and ably supervised by Strawberry who took a great interest in the proceedings.

All in all, it was a very successful Sunday training session, and the London delegates put up a fine show at the annual conference.

The list of places for a sleepover is lengthening. This is a convenient spot between Newcastle upon Tyne and Carlisle on the A69, about 15 or 20 kms from Carlisle just where the long straight ends and there's the steep drop down the hill.

Although it's not protected from the road, it's set well back so it's fairly peaceful and there's always likely to be some company. No early morning burger vans, but also no litter bins (I'm amazed at the number of lay-bys that don't have litter bins). .

Here we are parked up just off the M6 near Sandbach. There's a bit of the old road that was abandoned when they built the by-pass in the late 1980s and it was just the job for a sleepover. All-night petrol station with coffee and a grocery shop included too, and situated just across the road.

It's used these days as an informal car-sharing area, and it must be really informal as no-one woke me up to say hello when they arrived. There was only one other car here when I settled down for the night. Makes a change from last year when I went to sleep in a crowded layby on the A1 near Northallerton - and woke up next morning to find the place deserted.