As you probably know by now, the 2012 Olympic Games are to take place in London. The International Olympic Committee took the decision during its 117th session in Singapore on 6 July 2005. 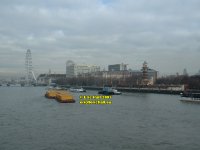 Now I've no idea how the members of the OIC reached their decision. They must have taken leave of their senses. You only need to look at some of the last few major British construction projects to see what I mean. The problems with the Millennium Dome are too numerous to describe. The problems with Wembley Stadium are likewise too numerous to recount. Then you have the Millennium Wheel, the name of which was discretely changed to the "London Eye" after it missed the millennium.

And then, of course, we had the Millennium Bridge, which was closed due to a design and engineering phenomenon that was first recognised over 150 years ago.

Let's face it. British architects don't even know the first principles of basic architecture, Britsh engineers can't build, British project planners can neither plan nor project, and the costs overrun by miles. So much so in fact that charities that depend on lottery cash to aid the poor, the sick and the otherwise disadvantaged are being squeezed. I just don't know what the IOC was thinking of when it awarded the Olympic games to London

Forewarned with this knowledge, Liz and I stopped off at Stratford on our way to London to have a look at the Olympic site, and to see the progress that they have been making. 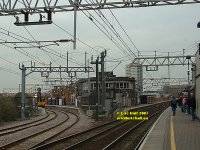 Whe you alight from the train at Stratford, then of course, it doesn't look as bad as it might. British Rail or whatever it is calling itself this week isn't renowned for its aesthetics these days, but doesn't go in for half-measures. It either goes in for the magnificent or the appalling. When it tries to combine the two, the effects are indescribably bad. So maybe it's just as well that it leaves Stratford Railway Station pretty much alone.

In any case, a new railway station, the "Stratford International", has been built on the new high speed link from the Channel Tunnel via Ebbsfleet to St. Pancras and destined to serve the Olympic Park. However this new station is bedevilled by all kinds of problems, as you might expect from a British construction project in the b liarite "Cool Brittannia" and might never see the light of day.

No-one is holding out too much hope for the new railway station, so it may well be the old transport interchange here, which serves the mainline trains, the Underground, the Docklands Light Railway and the local bus service, that will be the focal part of the Olympic park after all.

The original station at Stratford was built by the Eastern Counties Railway in 1839 as part of its original railway line from Mile End to Romford. It was (and still is, for that matter) an important hub on the East London transport network, and in the days when the railway was much more labour-intensive, there was a need for many more buildings. 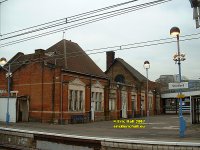 Not so today, unfortunately, as you can see. Much of the far side of the station, that which connects up to the services that cover North London via the Hackney and Walthamstow marshes is abandoned and now derelict. This is of course the side nearest the Olympic park. It's also the side of the station at which passengers from Stansted Airport arrive.

People in the know tell me that these buildings were originally the terminus of a company called the Northern and Eastern Railway. 'This was an early company, that planned to build a line from London to York. but its eyes were bigger than its bank account, as happened so often in the early days of rail.

Money ran out pretty quickly and the line was only constructed from Stratford to Bishop's Stortford and Hertford. But at least it managed to to reach London, thanks to an agreement with the Eastern Counties Railway.' 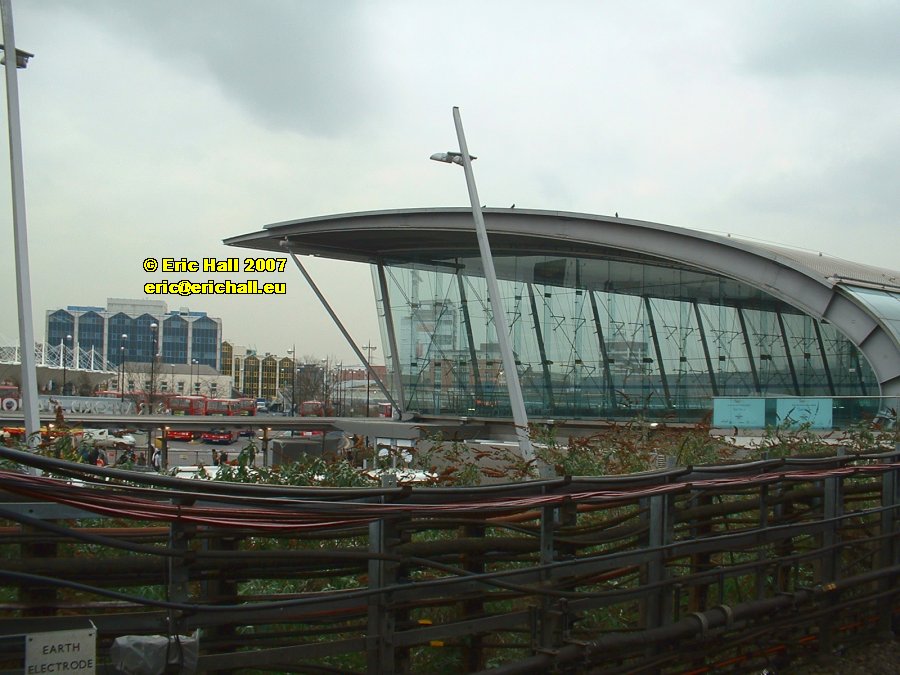 In contrast to the north side of the station, some effort seems to have been taken in modernising the main entrance at the south side. As you would expect these days, it's all steel and glass.

It's all very well the modern architect churning out stuff like this, but where is glass and steel going to be in 25 years time? Ohhh, for five minutes of an architect like Sir Gilbert Scott. 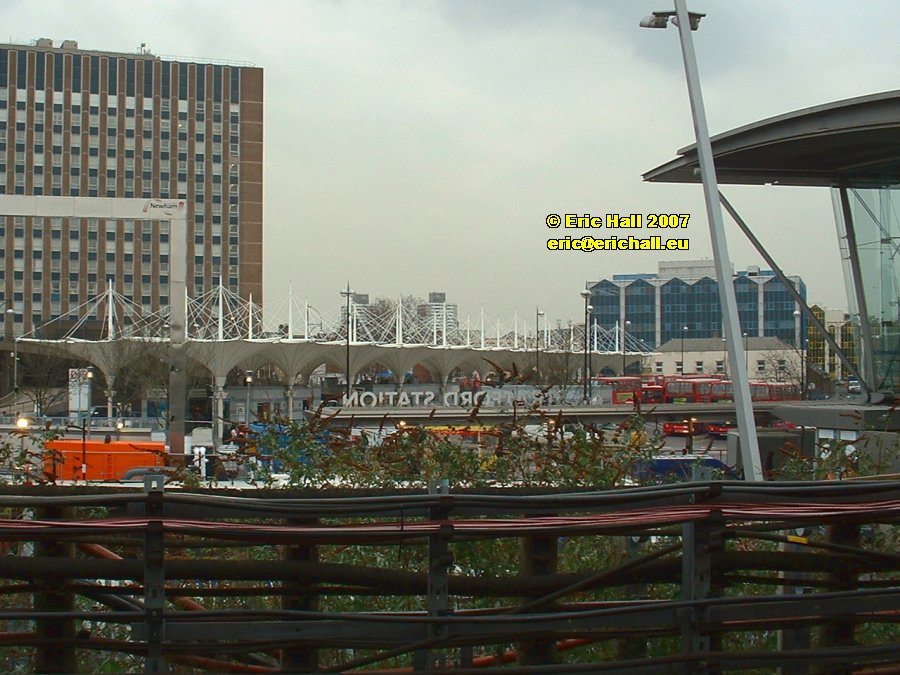 Well, to tell the truth, it's not all just steel and glass. There are also silly appendages all over the place. And while silly appendages might be the latest design statement for "Cool Britannia" today, where are they going to be in five years time when the Olympics opens?

You only have to look at some of the Austin Powers

films to see how quickly fads pass from fashion to dated and then to absurd. Real architecture will never die. 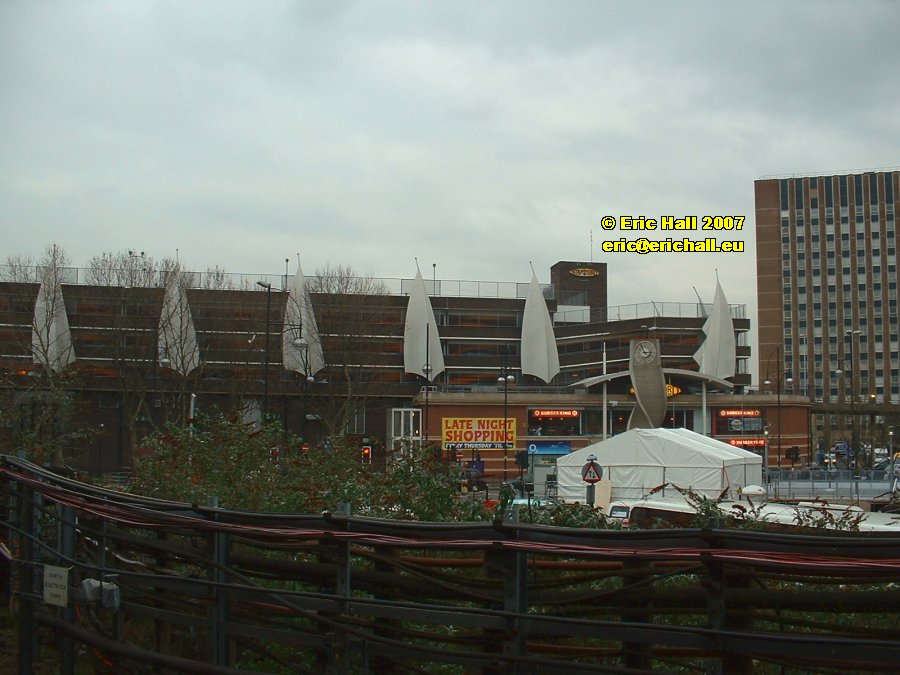 It's not just the railway that has gone berserk with silly appendages either. Newham Borough Council is following suit.

This is the local multi-storey car park across the road from the station. I'm not sure what purpose these sails are supposed to serve, but I imagine that with one strong wind, they will be gone long before the Olympic Games gets going around here. 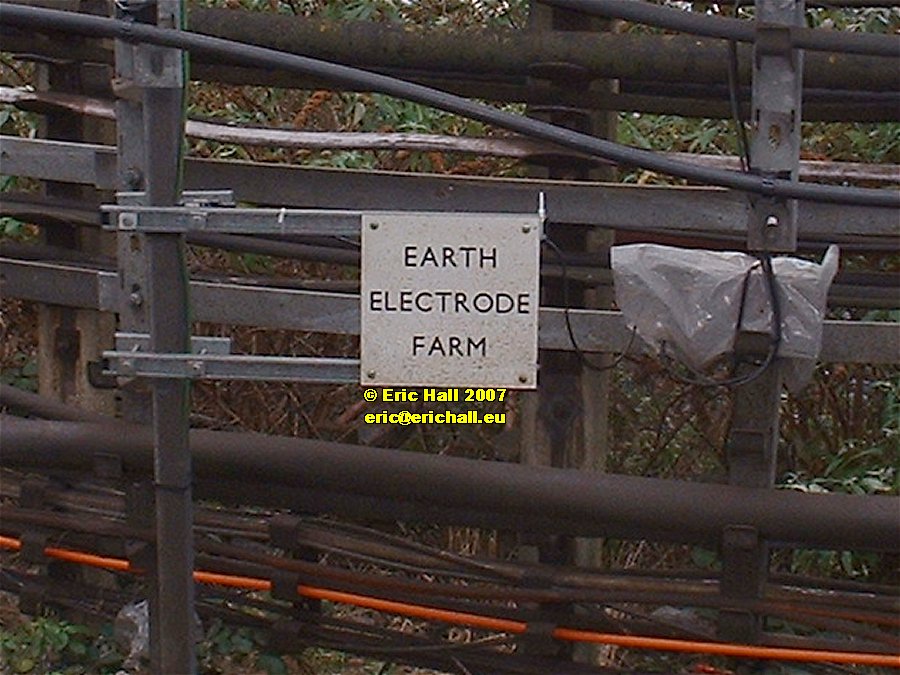 I can't leave this side of the station without capturing this sign for posterity. I would really love to know what foreign visitors to Stratford railway station will make of it.

I'm sure someone must know what it is all about, so please . You can also if you have anything to add to my comments. I like to interact with my audience, and all comments are appreciated. 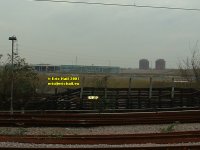 If you had been here 120 years ago, you would have seen a completely different scene to that which is presented today. This site was formerly Temple Mills, the Stratford Engineering Works of the Eastern Counties Railway, and later the Great Eastern Railway and then British Rail. In its heydey it employed 8,000 workers, but that was many years ago.

It was latterly used for major repairs and overhauls and as a carriage works, but finally closed in 1963.

Don't quote me on this as I didn't have the chance to go over for a look, but the building in centre shot looks like modern railway architecture to me. It is stated that the new Stratford International Station is about a third of a mile from the current station, and this looks about a third of a mile to me. But what kind of planner would build a major international railway station one third of a mile away from a major local transport interchange anyway when he can put it right next door? Only a British one of course! 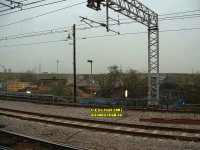 There are currently plans afoot to build two extra platforms to increase the capacity of the station. Construction work appears to have already started, with what seems to me to be the construction of an underpass to link up the existing subway with the new platforms. Behind the construction is more of what formerly was the engineering works, and which later became the London Freight Terminal for goods traffic brought into the city by rail.

In what is a sad indictment of the b liarite Cool Britannia's joined-up thinking, the terminal has now been closed and a motorway has been constructed probably not a mile away. This ordinarily would make it easier for road traffic to move in and out of the city, but that effect has been negated by the increased volume of commercial freight traffic on the road.

It is behind here that the Olympic Stadium is to be built. 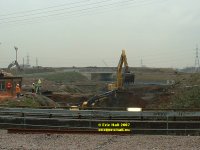 I'm all for symbolism as you know, so I couldn't resist taking a photo of this view. It's one digger digging itself deep into a hole from which it may not be able to extract itself.

Work on the Olympic site is due to start this year, 2007, and be completed by 2011 ready for the Olympic Games of 2012. But you've seen the engineers, architects and planners on other major Cool Britannia projects, and what their track record is. The Millennium Wheel and Wembley Stadium to name but two. Overdue, over budget and over-hyped. The Olympic Stadium is already way over budget and the hype is already out of control. Yet so far there's not a single brick been laid. No reason to suppose that it's going to come in on time either, given past history.

And what does the future hold for this stadium once the Games have finished? Most giant stadia survive through being suitable for other functions. Wembley formerly hosted major international team sports events as well as greyhound racing and speedway matches. Not to mention regular pop concerts. This stadium at Stratford hawever has to be ring-fenced as an athletics stadium. I'm not sure who is going to run in it though. I can't see the next generation of youngsters tearing themselves away from their computers for a quick half-dozen laps.

As an athletics stadium, its capacity is limited to about 25,000 people. That rules out most major events from being held here, and rules out the big football clubs like Tottenham Hotspurs and West Ham United from moving in, as Manchester City FC moved to the City of Manchester Stadium that was built for the Commonwealth Games. That just leaves those giants of London football ... er ... Leyton Orient (average attendance 2005-06 4699, maximum modern attendance 6720) as the likeliest tenants of this multi-billion pound state-of the-art stadium.

What is the International Olympic Committee going to do if the Olympic Stadium on the old freight depot fails to come up with the goods? I'm sure that long before 2012 arrives, we are going to be in for some major Olympic Blames. I hope they have a contingency plan up their sleeves. I cannot think what must have been going through their minds when they awarded the Olympic Games to London.