Ilford is a popular town with students from the Open University. It's on the fringes of London so it's easy to access, with frequent main line and underground rail services. It's quite cheap too, with some superb shops, a magnificent Indian supermarket (I always stagger away under a full load of herbs and spices), and reasonably-priced accommodation. If anyone suggests a meeting of students in the London area, you can bet your life it will be here.

In January 2007, a couple of students visited Ilford for a pre-pre-Senate meeting. I took this opportunity for a wander around in the evening with the Fuji. 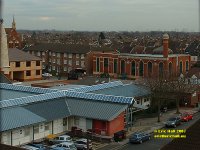 Before we went out though, I couldn't pass up the chance to take a couple of photographs out of the hotel bedroom window.

The first thing that should strike you (well, it struck me anyway) is that there are three religious establishments depicted. In the immediate foreground is a Hindu temple and community centre while just behind is a mosque. To the left is a Christian church. This is symbolic of multicultural Britain.

In the distance is a modern industrial complex. There are several wind turbines on the horizon, but you can't see them. The resolution of the camera isn't good enough to pick them out. 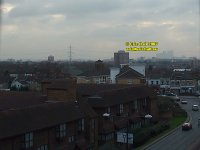 The view in the other direction is equally impressive. You can see exactly what I mean about the closeness of London.

In the distance you can see the buildings on the Docklands, and Canary Wharf. It's a pity that the day was so poor and that there was too much haze. A nice early spring day would have made so much difference to this photograph.

The famous Indian supermarket is maybe half a mile up the road to the left at the roundabout.

Ilford of course is synomymous with the photographic company of the same name that was based here for many years. Originally a manufacturer of film, it later branched out into the manufacture of cameras. In 1983 part of the company moved from Ilford to Mobberley, near Knutsford, Cheshire, and the remainder followed in 1996.

The subsequent future of the company is a true microcosm of the b liarite "Cool Britannia" post-industrial society. The old factory premises were demolished and what land was not absorbed by a ring road was bought by a supermarket chain, and the company was bought by foreign interests and subsequently went into liquidation.

Some of the company's former managers are currently carrying on some of the former business under the "Ilford" name.

Famous former inhabitants of Ilford include Percy and Edith Thompson, who lived in Kensington Gardens, on the north side of town between Valentines Park and the golf course in the Cranbrook area of the town. Edith Thompson was having an affair with the young Frederick Bywaters, and the latter stabbed Percy Thompson to death just round the corner from the Thompsons' home in Belgrave Road. It was proven to the satisfaction of the jury (although not to many others) that Edith Thompson was implicated, and both she and her lover were hanged.

Another bizarre claim to fame that Ilford holds is that it is the only place in the United Kingdom where a complete mammoth skull has been unearthed. This bizarre event took place in 1860 in the High Road. The skull now resides in the Natural History Museum, and Boot's the Chemists now occupy the site. 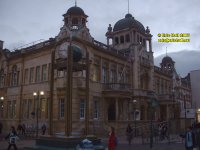 Ilford was formerly a borough in its own right, but under UK local government reorganisation, it became the focal point of the new Borough of Redbridge.

This building is the former Ilford Town Hall, which now serves as offices for the Borough of Redbridge. It was built in 1901 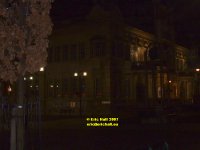 Impressive as the Town Hall might be, it looks even better by night, as you can see in the photograph here.

I took this photograph on our way to a pizza restaurant in the evening. It was while we were in there eating that we came to the conclusion that the local public transport had been organised by a 1960s pop music fan. The first bus that went past was a "123 O'Leary", followed by a "369 The Goose Drank Wine". When a 147 went past, we decided that he was also an armchair snooker fan.

It was lucky that we had moved on from the subject of buses and were talking about something else when a 69 went past. 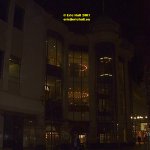 On the way back from the pizza restaurant we passed down the High Road and came across the Exchange Mall. Like most towns in the UK, Ilford has demolished much of its city-centre heritage and replaced it with an enormous and expensive shopping mall.

All of this is of course a crying shame, but one consolation is that in the right light and with the right conditions you can take a really nice photograph.

The Mall is built on what was formerly the western part of Ley Street, and the railway line passes underneath the southern side.

In fact, when you think on, take a look at most modern town centres and you'll see that there's mostly always a railway line or two that passes through. When you think that the railway lines are open to the sky, this is pretty much a waste of space. The Underground manages just fine with being underground, so why don't the railway companies sell the "overhead" of their lines? If they roofed them over, there would be tons of room for car parking, shopping malls, sports stadia and the like.

It's not a new idea. The Grand Central Station did this in New York in the 1920s and Chicago was quick to follow. In Den Haag in the Netherlands, there are two office blocks that straddle the motorway there. In the UK, the railway companies are missing out on a fortune. That thought alone ought to galvanise them into action. 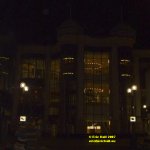 From outside, in the dark, the interior looks fairly impressive, doesn't it?. I'm impressed with the Fuji for taking photographs like this.

Fair enough, I've had to chipoter quite a bit with Paint Shop Pro to get something worthwhile to come out, and it's right on the limit of what is technically accceptable.

Nevertheless, I've seen a lot worse than this. 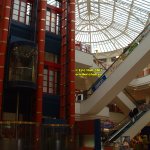 Inside the mall, you wouldn't know whether you were in Ilford, Ilkeston or Ilkley Moor (whether with or baht 'at). In corporate Britain, just as in corporate America, everywhere in a shopping mall just looks like everywhere else. In fact, the interior of this mall isn't too dissimilar to a shopping mall that Laurence and I stumbled across in White Plains, New York in 1998.

" from one of the shops in there, though, so it can't be all bad.

Outside in the main street where the major chain stores used to be, now there is nothing but Charity Shops and the ubiquitous Pound Shops. Not much good for most people, but for me they are heaven on earth. A treasure trove of used CDs, books, videos, and then the cheap rubbish-kind of stuff for which I can find so many uses. I'm loaded up from here every time I return home too.

If I can appreciate the Ilford High Street now that the major shops have cleared off elsewhere, then there's clearly something wrong with it. If I were you, I'd complain.