At the end of January I was obliged to visit the UK for a University Senate Meeting. I took the opportunity to arrive one day earlier to visit my friend Sue who had recently started work in Swindon. We arranged to meet in Bath so I went armed with the Fuji to take a final battery of photos before I upgraded to the Pentax K100D 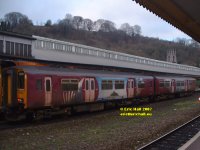 This photograph is taken from the up platform (London direction) of Bath Spa Railway Station. The train on the opposite platform sports the livery of the National Trust. 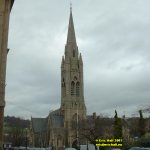 This church is the Roman Catholic Church of St. John the Evangelist, on South Parade. 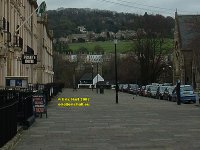 This is Pratt's Hotel on South Street, Bath. I know many of you might think it apposite, but I did not stay here. Sue had something much more exciting organised for me.

There's a lovely view of the Claverton Downs in the background. 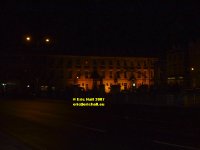 Down in the centre of bath are some nice Georgian stone buildings built towards the end of the 18th Century - lots of them in fact. They look really nice in the daytime, and even better at night. 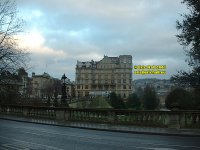 The Grand Parade and the Parade Gardens is the place to see and be seen in Bath, when the weather is nice, of course. Much of the contemporary Bath was designed by the architect John Wood at the end of the 18th Century. 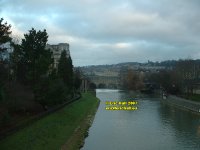 The River Avon skirts around the south and west of the old city. On the left is the Parade Gardens and the buildings of the Grand Parade. In the middle distance is the City Weir, and beyond that is the Pulteney Bridge, designed by Robert Adam but based on a design by the Italian architect Palladio for Venice's Rialto Bridge.

The bridge is renowned for its wide carriageway, which has shops on either side. 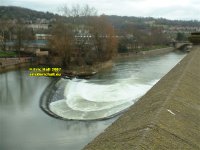 This is the City Weir, viewed from the Grand Parade. Further downriver you can see the bridge that carries North Parade Road over the Avon. It was from this bridge that the two photographs above were taken. 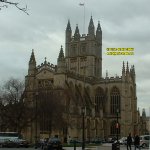 There has been an abbey on this site for well over a thousand years. A Saxon abbey church stood here from about 757AD. In 973 AD, King Edgar was crowned king of Anglo-Saxon England by Dunstan, formerly Abbott of nearby Glastonbury Abbey and latterly Archbishop of Canterbury.

Most of the Saxon abbey was replaced by a large Norman cathedral shortly after the conquest, but this was destroyed by fire in 1137. The present edifice was founded in 1499 and completed in the early 1530s. It was gutted during the dissolution of the monasteries under the reign of Henry VIII, but restored under Elizabeth I.

This view is of the western face. 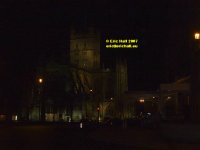 The abbey looks even more impressive at night, as you can see. This photo was taken from more-or-less the same vantage point as the one above, on the corner of the Grand Parade, several hours later. 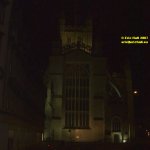 This is another impressive night shot of the western face. 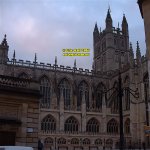 This view is of the southern face of Bath Abbey, as viewed from York Street.

In the photograph lower left is the old entrance to the Roman Bath. 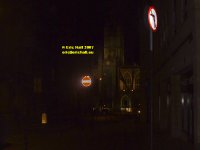 There is an extrememly good view of the nothern face of Bath Abbey from the corner of High Street and Bridge Street.

The view is even better at night, as you can see. 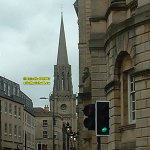 This is the church of St. Michael with St. Paul on the corner of Broad Street and Walcot Street.

This chuch is, unsurprisingly, one of the most famous religious sites in Bath. A church has been on this site for many hundreds of years - first being mentioned in the mid 14th Century. King Edward III granted a charter to the church in 1361. 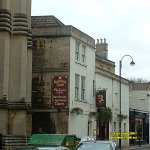 This is the Saracen's Head public house in Broad Street Bath. The name probably relates to former crusaders who would visit public houses in order to recount tales of their adventures in return for food and drink.

It plays an important role in the telling of the world's oldest joke
"I say I say I say! Could you tell me where I might find the Saracen's Head?" "Certainly, my good man. It's over there in that basket." 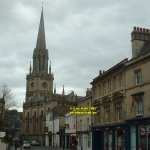 Another view of the Church of St. Michael with St. Paul, and the Saracen's Head Inn. 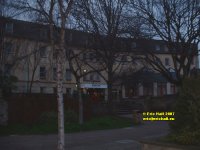 Sue arranged for me to stay the night here at the YMCA hostel, Bath. Consequently I was able to hang out with all the boys. The problem I have though when I hang out with the boys is that regardless of the lyrics, I prefer to do it all by myself.

The price was certainly realistic, but the sleep wasn't. The bed was so narrow that unlike Al Stewart, who had to sleep end to end

, I kept on falling out. 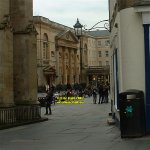 If Bath is famous for anything, it's the famous Spas. The Hot Springs, where the water issues forth at just under 50°C, were known by the Romans who had called the town Aquae Sulis, or the waters of Sul, who was a Celtic Goddess.

This is quite a different setting from another hot springs that I visited on my travels. The water, however, is supposed to have the same bitter taste. 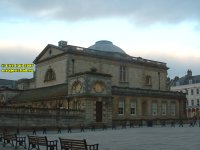 This is a much better view of the rear of the Pump Room, taken from York Street. This is in fact the third building on the site. The first was built at the start of the 18th century, but was remodelled round about 1751. The third Pump Room that you see here was designed by Thomas Baldwin and was finished in 1796. Baldwin held the post of city architect for the period 1776-1793, when he was dismissed for financial irregularities. 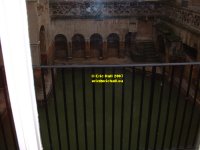 The Romans built a reservoir underneath the Pump Room, with a capacity of half a million gallons of water per day. This can be seen in the photograph on the left.

The level of water was formerly much higher, as is indicated by the red-orange line on the photograph. Lowering the water level has revealed much of the original Roman construction. 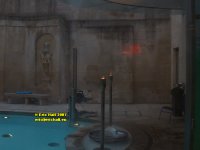 There are several other spas in bath. This small spa is the Cross Bath, so named as being the site where the unpopular Queen Mary of Modena, the wife of James II, erected a cross in 1688 in gratitide for her pregnancy. The child who was born is famous as James, the Old Pretender, father of "Bonnie Prince Charlie".

There is a chair that is used to help the differently-abled descend into the water. It obviously doubles as a 21st Century ducking stool.