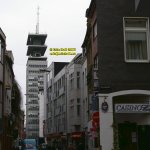 This building here in the background is apparently the old police headquarters for the Cologne area. I have to say though that it looks, well, not even kitsch. It appears to be something from the late 1950s "ersatz architecture" with a couple of afterthoughts stuck on for a change.

The police have now moved to a newer building across the Rhine, and this one is said to be empty. With radio antennae like this on the roof, I can think of a few good uses for this building. They are hefty stuff and I imagine that from high up there there would be some impressive radio coverage.

is that some of the distance shots can sometimes produce some startling new sub-shots that can be snipped out and made into images of their own.

If I'd have taken the photo above with the Fuji, I would have had neither the field of view nor the clarity of shot to snip out little bits such as I have done here. Still, never mind.

One thing is for sure, though. I'll be b*gg*r*d if I'm going in there, I'll tell you! This is the gay quarter of Cologne, so they say. And when I came back here a few months later, I discovered that I'd actually taken this photo standing right next to a gay "fashion" shop, and I hadn't even noticed.

And if there's an impressive-looking door open somewhere, I'll stick my head through it to see what's on the other side. That's how come I seem to have a tendency occasionally to find things like this. Yes, what a nice set of ecclesiastical cloisters, aren't they?

Apparently I'm in the garden of the Church of St. Maria Im Kapitol - the Kapitol relating to the site's previous history as a Roman temple.

From the outside, no-one would expect to see something like this here. This is because the exterior just looks like something banal, just like any normal street anywhere else.

And if you look here, you can see why. The cloisters have been incorporated into some new and modern living accommodation. Fordor, when he visited here in 1956, described the church as "an empty roofless shell". I suppose that something had to be done after the devastation of the war, and it probably wasn't possible to restore everything as it was. There isn't much point in having magnificent edifices if the inhabitants are living in tents. 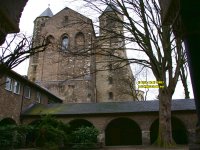 Over the top of the cloisters you can see the main building of the church. War damage is clearly evident, and the building has been restored using all kinds of different bricks. I suppose that building material was in pretty short supply after the war and they had to make do with whatever was available

Nevertheless, you can see the size of the building from here, and see where it looks like there might have been later additions. It must certainly have been an impressive building prior to the events of 1939-45.

In the middle of the First Century AD a Roman temple was built on the site for the worship of Juno, Jupiter and Minerva. Ironically, during the excavations for the reconstruction of the church after the bomb damage of World War II, many remains of this temple were uncovered.

Some 600 or so years later, the wife of Pippin II - he who effectively ruled the Frankish Empire in the late 7th Century at the time of the Merovingian rois fainéants and who was father of Charles Martel - built a church on the site for the worship of Mary, mother of Jesus.

Although this church was modernised and rebuilt on several occasions, most notably by the Archbishop Bruno I in the 10th Century, it was felt that it no longer measured up to the ambitions of the Holy Roman Emperors. They felt that something much more impressive should be built and so, in the early 11th Century, it was decided to build a new church on the site. This was to be part of a convent of Benedictine nuns led by Abbess Ida, a relative of The Holy Roman Emperor Otto III.

Construction commenced in 1030, and it was consecrated in 1065. It was later to become one of the twelve famous Romanesque Basilica in the city.

Its layout however is essentially the work of Archbishop Herimann II of Cologne, in the mid 11th century, and its impressive size for the day is said by some to reflect his ambitions. Its western end is a representation of the royal palace at Aachen, and the eastern end, in the photograph just here, was said to be the ground plan of the choir of the Church of the Nativity in Bethlehem.

Many substantial donations of money and artefacts were made by leading figures of the day such as Bruno, Bishop of Toul (just after he was elected Pope Leo IX) and the Holy Roman Emperor Heinrich III. It is famous for its magnificent 11th Century wooden doors (which were closed when I was there) and for its carvings of the life of Jesus inside. There's also an immense crypt under the choir.

There are many relics here in the church, and it's surprising how they managed to survive destruction during the war and the subsequent looting by the Allied Army of Occupation. These relics include a shrine to the 3 wise men of the nativity dating from about 1200AD, a "Plague crucifix" dated from 1304 and in the shape of a fork, and a rather magnificent rood screen from 1523, which you can see in the photograph here.

There's also a quite impressive 12th Century statue of Mary and Jesus in the church. 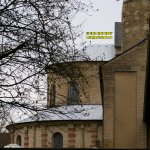 Over the passage of time, the church underwent many reconstructions and renovations, the most famous of course being that which took place after World War II. In common with much of the rest of the city, the church suffered the most appalling damage in World War II. Photographs taken in 1945 are really quite frightful.

Reconstruction of the western part of the church began in 1956, and the church was finally reopened for worship on Christmas Eve 1984. The eastern side was rebuilt later.

Now I hate poking fun at the way foreigners speak English - in my mind anyone who sets out to communicate in any foreign language at all deserves a medal. And the less they know, the greater is the effort and the greater should be the medal (you should have heard me speaking Russian in Moscow in 1979). 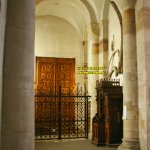 But when you see something like the following reproduced on what is evidently a professional publication, then one must really wonder what goes through some people's heads.
Worth seeing are also in the southern side ship the bones of Greenland Wales of the last ice age, which into a Rhine arm had probably erred and there is ended. The bones were discovered centuries ago with construction work and are already issued over a Beichtstuhl hanging on a chain. In Cologne it is well-known as Zint Märjensrepp"".
I've left it in though, because I think it's rather quaint.

But if you'll just excuse me for a moment, I'm just off to into a Rhine arm to probably err, and I'll probably need to use the Beichstuhl. I should really leave off these spicy baltis. When I've finished, I must remember to pull the chain (assuming that the train is not standing in a station at the time). 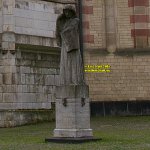 There is a tradition in the Roman Catholic church to spend a great deal of time in veneration of Mary, the Mother of Jesus. And I'm never quite sure why. The way I see it, the principle figure in the Jewish religion is God, and that of the Christian religion is Jesus Christ. I could never quite work out exactly what Mary's importance is in all of this.

From what I understand, her role in the Christian religion was one over which she didn't have much control or very much input - although one can hardly have any issue (chortle) about the output.

Anyway, seeing as this chuch is dedicated to St. Mary, one assumes that it is Mary the mother of Jesus, and that this is her statue right outside. 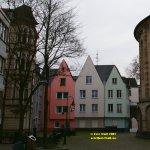 The best bit is always round the back, said the actress to the bishop, and she wasn't joking either. These houses are quite quaint and cute - typical west-German medieval architecture of which Cologne possesses many fine examples, despite the 262 bombing raids that the Anglo-Americans are said to have launched against the city.

I was trying to work out if they were "as original", or whether they had been restored after bomb damage. The best place to look is on the central beam of the roof. Under the weight of medieval slates, after 600 years the central beam will be sagging. Here, it looks far too straight and level to be original. Although I could be wrong.

But of course, don't get me started on the bombing campaign again - I can go on all night.
Not with a bayonet through your neck you can't!

Even further around the back, there is yet another quaint house. This one seems to be much more recent that the other three in the photo above, and once again it seems to be in much better condition than its age might suggest.

It was round about here that I noticed the time - and I had to be at the bus station in an hour from here. Otherwise I'd have gone through the archway and round to the front of the church to see the 11th Century wooden doors.

You can get a good look at the church here, and see the different strata of construction. The larger rough-hewn blocks of the early construction contrast with the more even blocks of later work. And if you look closely at the bottom of the church, you'll see what look suspiciously like shrapnel scars to me.