The Dusseldorf branch of the Open University Students Association held a social get-together one Saturday evening in Cologne in mid-March 2007, and in my capacity as chair of the Northern European Regional Organisation, I thought I'd nip along to encourage the troops. It would give me a chance to try out my new Pentax K100D

", and to meet Jackie Schüller, our long-suffering secretary.

I arrived late-morning on the 08:22 high-speed Thalys from Brussels, on a train that came from Paris. As well as calling at Brussels, this train also passes through Lille Europe railway station, so theoretically you can even get to Cologne from London on the High-Speed Link. But not from anywhere else in the UK by train - that is quite another story.

The Cologne Railway station, or the Kölner Hauptbahnhof, is claimed to be the busiest railway station in the whole of Germany. It's not only packed with local and national trains but with international ones too. In fact, Cologne has quite a history of international rail travel. The first international railway line was built by the privately-owned Rheinische Eisenbahn in 1843 and ran from here to Antwerp.

This particular incarnation of the railway station dates from 1894 and is built on the site of the city's former botanical gardens. What is best described as the platform hall, the bit where the trains stop, is 225 metres long, 65 metres wide, and 24 metres high, and is covered in a single span.

Here are a couple of photos of the railway station at night. Things always look so much better at night, especially railway stations. It's nice to have a camera again that can do justice to night shots.

The station has recently undergone another major overhaul, and underneath the tracks is now quite a labyrinth of shops, restaurants and cafes, something for every kind of traveller on every kind of budget. I negotiated for myself a huge plate of chips ("fries" for our transatlantic cousins) and two huge granary bread rolls for my journey home, all for the grand sum of €4:00 ($5:00, £2:50).

Getting across the Rhine has always been a major problem - you ask the British 1st Airborne Division - and it was quite an effort for the builders of 1859 to build a bridge across here. It took them 4 years to complete their four-arch "Cathedral Bridge", but it has to be said that it was a massive structure of iron and sandstone, each arch having a span of 99 metres. 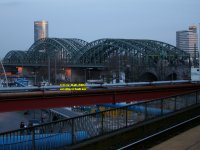 Once it was built, the amount of traffic that was attracted here made it almost immediately obsolete. The situation deteriorated so much that between 1907 and 1911 the present Hohenzollern Railway Bridge (named after the ruling Royal Household of the German Empire) was built. If you look very closely, you can see that it's actually three parallel bridges. The original configuration was that two of the bridges carried 4 tracks of railway, and the third carried a roadway.

Even this proved to be insufficient, and so when the bridge was rebuilt after having been blown up by the retreating German armed forces on 6th March 1945, it was dedicated entirely to the railway. 6 tracks now cross it, and it's now said to be the most heavily-used railway bridge in the whole of Germany.

As an aside, the above tells you all you need to know about the accuracy of the British terror-bombing raids in World War II. There were 262 bombing raids on the city in total, one of which on 30/31 May 1942 had 1047 planes, and another of 858 aircraft on 2 March 1945 by which time all German air defence had effectively ceased, yet they couldn't destroy a target this size.

Some clown at the Imperial War Museum at Duxford told me that British bombing in World War II was accurate. A thorough interrogation of this mass-murderer revealed that a British bombing raid was deemed to be accurate if, out of 1,000 aircraft each dropping 1,000 bombs, one of those million bombs happened by some weird chance to land on the target.

This is of course a different scale of accuracy from that achieved by a German "hit and run" daylight bomber on 9th September 1940, which dropped its one bomb, not merely on the Standard Motor Works at Canley on the outskirts of Coventry, but actually onto the factory paint store, full of cellulose paint.

One can easily imagine the subsequent explosion, conflagration, and damage to the factory. The colour that it would have brought to the cheeks of the air defence "experts" would have been worth watching too. Especially when you consider the primitive nature of the navigational aids that the Germans had in 1940 compared to what the Anglo-Americans could call up in 1944 and 1945

Then again, this isn't a patch on the events of the evening of 17th February 1918 when a German Staaken R.VI "Giant" bomber flew alone over London and dropped a bomb on St. Pancras station, with no navigational aids at all.

And even that pales into insignificance when one recalls the events of 7 October 1914. With the even more primitive navigational aids that existed three and a half years earlier shortly after the outbreak of the war, a British Royal Flying Corps Sopwith Tabloid biplane made a successful attack on the Cologne Railway Station with just a handful of 20lb (9kg) bombs.


But while we are talking well, one of us is of three bridges, modern builders would agree with me that 5 Bridges would have been Nice 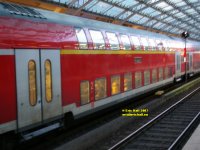 I talk at great length ("Surely not, Eric. Perish the though" - ed) elsewhere about how railways in the USA are so busy that they have to stack the freight containers one on top of another so that they can cram as much freight into the smallest possible footprint on the railway lines so that more trains can use the lines.

Here in Europe they have a similar problem, but the bottleneck here is caused by passengers. So, the mainland European solution is to stack the passengers one on top of another in double-deck passenger trains.

The British solution to overcrowding on the railway is to hike up the passenger fares to drive away all the passengers. In February 2007 I was asked to pay £128 (€200, $250) for a return ticket from London to Bath, United Kingdom when I went to see Sue, a journey of just over one hour. My return ticket from Brussels to Cologne of almost three hours cost me €51 (£30, $60). Just look at this to see what kind of farce is being played out on British railways.

And if there are still too many passengers for the British trains despite the appalling prices, they have to stand for their journey. This has inevitable consequences when a British "engineer" forgets to put two bolts in a hole correctly, events that are occurring more and more frequently on what passes for railways in the UK.

British rail travellers have been promised 1,000 additional carriages, but not until 2014. Does it really take 7 years to build 1,000 rail carriages? My opinion is that these 1,000 new carriages won't be additional ones at all, but will be replacements for all the ones that will be smashed to pieces on Britain's appalling rail network in the next 7 years. Of course, passenger numbers will decline as more and more of them are hurtled into an early grave by the scandalous (lack of) maintenance on British railways. More and more corners being cut in an effort to increase the profits and the shareholder dividends.

Another result of all of this is the total chaos on the roads as people have no other choice than to take to motorised traffic. Anyone who has been obliged to travel on the M25 or the M6 around Birmingham will know exactly what I mean. And the British answer to traffic congestion? Why, tax the road travel too! The allegedly socialist b liarite government is taxing UK citizens to the hilt, and the poor misguided Brits can't see it.

The government says that it is planning to scrap the annual road tax charge (the cost of which varies depending on the engine size and emissions) and the fuel tax charge (which of course means that you pay less, the more economical your vehicle is) and replace it with a flat rate charge. So who's going to run around in an economical and environmentally-friendly microcar when they'll be paying the same price to use the roads as a Humvee? I'm surprised no-one has cottoned onto this.

Another thing is that in order to buy your road tax, you need to present a valid motor insurance policy and Inspection Certificate. So at least everyone knows that once in a while every car is insured and tested. With the plan to abandon the annual road tax, how are they going to check up on this? Just watch that after a few months, they'll reintroduce the annual road tax at a "nominal level" just to verify the insurance and test aspect. And we all know what happens subsequently to taxes that are introduced at a "nominal level", don't we?

You really would think that Britian would be getting its act together and getting its railway network organised. But it's getting to the stage now that there's a whole transport underclass that can't afford to move anywhere.

Britain is probably the only country in the world where the loss of fuel tax duty to the government is actually factored into the costs of improving passenger transport networks. So rail lines, tram lines and bus routes are already starting off from a long way behind, with no hope of catching up. As road taxes are raised higher and higher, the mountain that public transport needs to climb becomes steeper and steeper.

For the UK, the British government sees environmentalism as just another excuse for excessive taxation and government fundraising to pay for the naked aggression in Iraq and Afghanistan. It's high time that the British people woke up and smelt what is going on all around them. Don Henley

must really have had Tony B liar, New Labour and the British citizens in his mind when he wrote
"The barons in the balcony are laughing and pointing to the pit"
"They say, aw look, they've grown accustomed to the smell, now people love that shit"
"And we're workin'it"

The Alter Wartesaal at Cologne railway station is, as its name suggests, the former waiting room for railway passengers. It was opened in 1915, and played host to Kaiser Wilhelm II among others.

This reminds me. If you have anything to add to my site, or wish to correct an error, or just like to engage in a bit of lively banter, please . I love to interact with my audience.