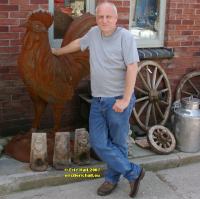 Paul was pretty insistent about taking this photograph. Ahhh well. I'm sure you can all think of your own description without any help at all from me.

But on a sartorial note, you can see that I haven't yet fully adapted to living in Caliburn. I'm wearing jeans and a light coloured tee-shirt. These days, if I'm setting off anywhere to live for a while in Caliburn, it's black tee-shirts, black quick-drying sports trousers and a black fleece jacket. You can't see the dirty marks, they wash easily in a truck-drivers' shower, and they dry in a matter of a couple of hours. 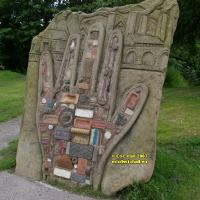 Liz Ayers and I were in North Wales on our way between various Open University meetings, so I took her for a walk over the Pontcysyllte viaduct between Acrefair and Llangollen. At the canal basin at the Acrefair end is this crazy sculpture.

It doesn't resemble very much of anything at first glance but later on I worked out that that the carving at the top of the sculture represents traditional industry of the area, and the bricks and so on embedded in the hand represent the produce.

Dunno about you, but I consider it somehow rather ironic that the produce all seems to have been salvaged from demolition sites in the area. And news just recently of another major employer just down the road at Cefn Mawr closing its doors fills me with even more depression.

"I hope this will provide an opportunity to develop the area for tourism and leisure ... I hope now that the company will make every effort to clean up the site so that we can move forward" screams a local campaigner against the factory. Tough for the 163 people who were earning a living there. What about them? Just how selfish can people be?

Now, I was on my way to see my friend Lorna who lives in the vicinity of Dunfermline, so it seemed pretty logical to me to fit the cab in the back of Caliburn and drop it off. That way, everyone is happy.

You can see that it's a pretty tight fit in here, and it obviously grew during the journey, for it was much more difficult to take it out that it was to put it in.

And how did we stop it from crushing its roof as I was driving? Well, what we did was to hang it from the roof of Caliburn with a ratchet strap.
Crude but effective.
Just like me, in fact.

Having dropped off the Morris minor van cab in Kirkcaldy, next thing to do was to find a place to stay for the night. And right on the sea front is a handy lorry park. It was here that I parked up.

Having the waves lapping at my door was reminiscent of another time two years earlier when I was on the Outer Banks of North Carolina. The circumstances were slightly different though.

As for the truck stop, there was a cafe type of place on here for a morning cuppa and bacon butty, and also a washroom complete with attendant. I reckoned the 30p to use the toilet and washroom was excessive, and the £1:50, $3, €2:00 for the use of the shower was ... er ... expensive, but at least they were available and I couldn't find any fault with them at all.

While I was up at that end of Scotland I took the opportunity to walk across the Forth Road Bridge. I've lots of photos that I'll put up in due course, but this was one that took me rather by surprise. And it took me a while to work out what it was.

If you have a close look at the bus here, you'll see that the front of the upper deck and the roof are missing. If you are going to take off the roof to make an open-top bus, it's normal practice to leave the windscreen in. So I reckon that the roof has come off this by accident, as in a low bridge kind of accident.

Just up the Forth in a Stirling direction is the small town of Culross. This is a historical site and so I imagine that whatever there is that goes on here is pretty much controlled by the local authority. That's wht I was totally surprised to see a wind turbine in someone's back garden.

Many of the major nuclear, oil and gas producers see the proliferation of wind turbines as being detrimental to their profits. They have infiltrated many of the environmental pressure groups and have manipulated the emotions of the members to such an extent as to whip them up into a frenzy of misguided opposition to anything that doesn't make a profit for their secret paymasters.

You know, I once even had a young girl from the area - a University student too - ask me if it was true what she had heard that the manufacture of a wind turbine uses more CO² than it actually saved. You can't believe that even supposedly intelligent people fall for the crazy propaganda of nonsense such as this.

There was also a small solar panel providing some kind of electricity to someone's garden shed. I tell you what - Culross was proving to be a pretty exciting place.

I was surprised that the environmentalists hadn't been up in arms about all of this, but there again, with the Longannet coal-fired power station just down the road and the coal being hauled by a diesel locomotive just past the end of the garden, what difference will a small wind turbine and solar panel make?

Further up the Firth of Forth is the Kincardine Bridge - another place where I took a pile of photographs that I'll put on line in due course. This was another photograph that I couldn't resist taking as I walked across, even though it had nothing to do with the bridge itself.

To my mind, it looked like someone had just fired a compressed-air torpedo at the bridge, leaving the tell-tail trail of air in its wake. I was half-expecting the bridge to go "BANG" as I walked past.

Take Richard Reid, the "shoe-bomber" for example. If he had really wanted to bring that aeroplane down he would have set fire to his shoe in the comfort and privacy of the toilet, not in the passenger cabin where it was odds-on that he would be overpowered. Western governments are for the most part exaggerating the seriousness of a small part of whatever is going on, and making up all the rest.