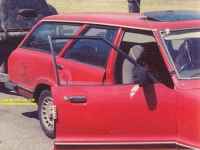 This car was first registered in 1981 and has been my pride and joy since 1991. It's complete, original, still with the original transmission. Although officially "laid up" under cover since late 1994 (it still gets to "stretch its legs" occasionally), I have no hesitation in jumping in it to go anywhere. Its last major trip was from Brussels to the Auvergne in November 1998, 750km or 450 miles, and it didn't miss a single beat even though it was fully - loaded and towing its fully-laden donor car behind on an "A" frame.

Until the motor gets really warm the engine smokes like anything, and the electrics are .... er .... questionable (due to water dripping under the windscreen onto the fusebox) but it's still probably one of the most reliable Cortinas around.

Back in 2000, I bought a low-mileage accident-damaged Granada with a 2000cc motor and five-speed gearbox, with the intention of dropping all of that into it. However, just recently (April 2006), I've become the proud owner of an old Ford Escort van, complete with an 1800 cc diesel engine (tested until the end of July 2007 and taxed until January 2007, and all for £150 too, but that's another story). There's still some life left in that van for a couple of years, but when the body gives out, I have an interesting future lined up for that engine. Don't I just?