So, having already got the introduction out of the way, what hints or advice can I give you about living in a van?

Well, of course, firstly you need a van. Goes without saying really, doesn't it?

Leaving aside the question of roadworthiness for the moment, the first thing you need to consider is the size. The load bay of the Escort from the back door to the bulkhead is 175cm (five feet nine inches) long. So am I when I am lying down. And at night, when I'm wedged in without an inch to spare with my head up against the bulkhead and my feet against the back door, I really wish that the Escort was a couple of inches longer.

I could have taken out the bulkhead, but they serve several useful purposes, as I will explain later.

You'll need to consider the height of the van. The Escort from floor to ceiling is high enough for me to sit easily upright with a couple of inches to spare. You don't want anything lower than this. I would be happier with the van being another few inches higher, so I could fit a bed base in elevated from the floor so that I would be insulated from it, and so there would be extra storage space underneath. Storage space, by the way, is going to be an eternal gripe.

The width of the van isn't particularly relevant. Anything that's on the road in Europe is going to be wide enough for the solitary traveller.

Now, of course, from the above, you will probably be thinking that "the bigger the better". Well, think again. While it's true that what will hold a lot will hold a little, you also have to think that the larger the van, the more you are restricted. If you think about underground or multi-storey car parks with height barriers that prevent you taking advantage of the benefits that they might otherwise offer, and then motorways where you are restricted to 60mph, and ordinary roads where you are restricted to just 50 mph, and the difficulties of heating them in winter, then you can see that larger vans are not all that they might otherwise be cracked up to be.

You have to add to this the footprint of the vehicle in modern traffic, especially in built-up areas with heavy traffic, and parking spaces in towns or on supermarket car parks. Yes, there's a lot to be said for Mies van der Rohe and his principle of "less is more".

On a principle of size alone and without any other consideration, if I were going out to chose a van specifically for living in, then it would have to be a van such as the Peugeot Expert. With a load-bay length of just over 2 metres, and a height of 1.4 metres in the "high-top" version, then that would certainly do it. Sitting down, I'm at a height of 900mm, so there's plenty of room to put a small bed base in here with storage room underneath.

Having said all of that though, I've recently bought myself a Ford Transit. I'm setting myself up by way of business installing wind turbines and solar panels, so I need to carry around tools and equipment too.

So while I have Caliburn's doors open I thought I'd take a quick pic of my living accommodation as at September 2007.

Starting from the top is the cargo net hanging from the roof where I put my clothes when I'm sleeping. There's also one of these coat hanger things where I put the stuff I empty from my pockets when I retire for the night. In shot is also a 6-volt flourescent light that works either with 4xAA batteries or off a 12-volt adapter.

The bed is an old "5th bed" out of an old 4-berth caravan that I scrapped. I'm lucky in that I'm 175cm (5 feet 9 inches) tall and a modern Ford Transit is 178cm (5 feet 10 inches) wide, so I cut down the stretcher thingy to fit, fastened the fixings to the sides of the van, and there we were. For a mattress, I use one of these aerobics mats, and I bought a cheap quilt set from ASDA.

My suitcases are underneath the bed, and you can see my rucksack with my washing stuff in for when I stumble across a truckers' shower. 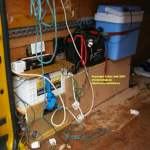 You can pick up split chargers for four or five quid from Towsure. These are for wiring into the charging circuit so that you can charge up a secondary battery in the van. A secondary battery such as the one here powering your electrical accessories saves you flattening the main battery of the van.

You can also see the 300-watt mains inverter that runs off the spare battery. This powers my laptop, small power tools and so on, a socket for plugging my 12-volt accessories, a AA/AAA battery charger, the 12-volt coolbox and the black powerpack with a useful work light.

What you can't see in the pic as it's out of shot is the mains 200-watt greenhouse heater that I fitted in December, just to take the frost off. This also runs off the inverter. 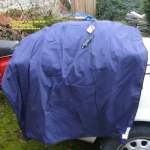 One of the accessories that I have in Caliburn is a 12-volt electric blanket, that I bought in Canada in 2000.

When I'm planning on sleeping in the van at night in winter I plug the blanket into the spare battery while I drive around looking for a parking spot. It warms the bed up a treat and makes it so comfortable even in minus temperatures.

I leave it plugged in throughout the night and believe me, it's so nice in there next morning that it's really quite difficult to get out of bed. And, of course, the vehicle's main battery doesn't go flat either.

If you've never driven a van seriously before, one thing you'll notice is this huge blind spot over your left shoulder (or right shoulder, if it's a left-hand-drive vehicle you've bought). And this can often lead to fatal results. Regardless of what anyone else says, you'll need a convex (or "fish-eye") mirror to cover that blind spot. It goes without saying that there is one on the LDV as you can see