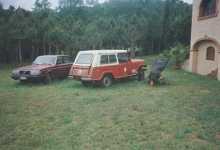 I had photographs of this vehicle posted up on a newsgroup for a couple of years challenging people to identify it, but no-one guessed correctly. Most people thought it was a Jeep - but they were wrong. I suppose I'd better tell you what it really is.

Well, most people were nearly right! During the 60's the USA and Europe had a vague and nebulous embargo on the sale of goods to Franco's Spain. However, Spain was an ideal market for 4 wheel drive vehicles, what with all the mountains and the snow up there in wintertime. Land Rover negotiated around the ban by building their vehicles in Spain and calling them the "Santana", whereas the American Jeep company sold the pattern and machines for their discontinued "Jeep Commando" to a Spanish company called Viasa, who assembled it as the "Comando". A short while later, the Ebro company bought out Viasa and thus the "Ebro Comando" was created. This is an Ebro Comando. 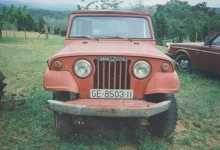 The main difference between this and the traditional American Jeep Commando is the engine. This has a British "Perkins" diesel engine in it. Apart from that, though, the differences are not particularly significant and to all extents and purposes it's a real and proper Jeep, as you can see by comparing this photograph of the Ebro with this one of a Jeep that I took in Colorado USA in September 2002.

The story behind this Ebro was that it had been lying around on the farm of a friend of a friend up in the mountains in Northern Spain for years as a non-runner because the rear diff has locked up and it was sucking air in through the fuel line. Now, the owner was thinking of moving on, and he wasn't planning to take the Ebro with him.

Cue International Rescue. This was where Paul and I came in. We duly leapt aboard Paul's old ex-Post Office diesel Series IIA Land Rover, and sped off into the night. 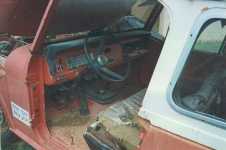 You can see that time has not been kind to it, but we weren't bothered about this. Here was a piece of motoring history and we were about to have probably the only Ebro ever to venture permanently off the Iberian peninsula and over the Pyrenees. We stuck it onto a trailer I'd hired in Brussels, and headed off back towards Belgium. It stayed in Belgium for a couple of years until I made the farm in Pionsat more habitable, and then we towed it down there on another trailer. That however, is another story.

We've had it running, just to prove that it does indeed work,but now it's in a dry barn with several other old cars to keep it company, waiting for me to get round to sorting it out. One day, it's going to look like this and this, or even like this.

I have some more photos of the Ebro on another page.