I was born on the 24th February 1954 (Pisces, and a "Wednesday's child" to boot!) in Nantwich, United Kingdom.

The earliest period of my life was spent in a hut on an abandoned Airfield at Calveley, Cheshire, where I contracted pneumonia as a baby. When I was about 1 year old, we moved to Shavington, Cheshire, and later to Crewe.

I left home at 18 and lived in 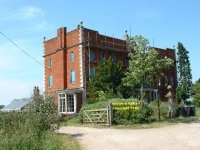 I also own a plot of land in New Brunswick Canada, hard up against the USA frontier and close to where my niece lives. This is in effect a direct continuation of the famous Mars Hill in Maine and my long-term aim is continue the Mars Hill Windfarm across the border onto my land. This is, however, not a project for tomorrow or the next day, always assuming that I can obtain some funding.

Nevertheless, it's a good excuse to keep on visiting Canada.

And what am I up to now? You can find out for yourself by visiting my blog.

Diploma in Politics and Government

The most important influence in my life is music. To me, music was freedom and there was nothing more important to me when I was 14 than to escape down the bed until sometimes 2.00 in the morning with the little 19/11d transistor radio with the earplug stuck firmly in the ear. This was 1968 and Radio Luxembourg 208 was beaming music across from Europe which the BBC would never even thing about broacasting. My schoolwork suffered, but "what the hell? This is what the Open University is for".

Anyone remember Golden Earring (still touring 30-odd years later - I saw them in 1997 in Ostend?). Titanic? Shocking Blue? Alquin? To me, music was definitely "escape". By this time too, American folk rock such as "CSN", Dylan and their British counterparts such as Lindisfarne were making the news. This led on to the traditional mainstream British rock music such as Jethro Tull, Wishbone Ash, Black Sabbath, the Who, Led Zeppelin and so on.

When I lived in Chester I hung out with a bunch of guys (see under "motorcycles"). One of whom, Paul Grindlay, was a real Welsh Rock fanatic, consequently ""Man" and "Help Yourself" were pretty big on our agenda. One highlight of my life was seeing Man, with the now sadly-departed John Cippolina jamming along, playing "5151-771". You can have a listen to the studio version of "5151-771" if you have RealPlayer installed.

There's more John Cippolina and even more if you have plenty of patience.

Most meaningful people who have come into my life have left me a musical souvenir. I was listening recently to some "Camel" ("Freefall", in fact) and it suddenly seemed as if Jackie Marshall was standing in the room with me. What has happened to her since 1975/76? She was ever so sweet! She used to buy me "Hawkwind" records and lend me records to tape from Nantwich Library where she worked on Saturdays.

In 1974/77 I played bass guitar in a rock group. At first quite honestly I was carp but by the time I got to be really good it was too late. Time had moved on. But I still have the axe, man (a Gibson EB3), and my amp and cab, and I'm waiting for offers!

So it doesn't matter what I'm doing or where I'm going, there has to be music whilst I'm doing it. Anyone who's driven any distance with me will know about this, and has suffered my awful singing.

So what's on the current playlist?

(you can see that nostalgia ain't what it used to be)

When the sadly-defunct "The Broadcast Web" and "Onion River Radio" were broadcasting, I bought tons of stuff from obscure American bands such as "From Good Homes", "Semisonic" and the amazing "Widespread Panic", and I even managed to see "Widespread Panic" live in concert on one of my visits to the USA.

Thre isn't a really good replacement for Onion River Radio or The Broadcast Web (or if you have found one, then with the details).

In the meantime I am running a small radio production company in France, in which I write, produce and co-present English-language radio programmes supplying general information to the English-speaking community in France. These programmes are networked to a few French local radio stations. It goes without saying that one of our offerings is an hour-long classic rock show.

So, where do I buy my music from these days?

Well, the sad fact is that my nearest record shop is 30km (20 miles) away, and if you want a good selection of Celine Dion, Jacques Dutronc or Johnny Halliday, you will be in your element. Unfortunately, my tastes are a little bit ... er ... diverse so I have to rely on mail order, and in particular

. I can safely say that even ordering with Amazon from the USA, an "in-stock" order has NEVER taken more than 5 days to arrive, even in the sticks where I live, and I've never experienced even the remotest problem. So, search for you favourite album, book, artist, computer program etc etc here

and see if they have it, and at what price. I personally am really pleased and impressed with their services.

"Motorbikes" was also a synomym for "escape", and the first one that I had was the rare Suzuki M12 50cc. It cost me the £20 I'd saved from working on a milk round. Next question was actually learning to ride the thing, but I managed fine in the end. I fell in with a bunch of lads all who had similar bikes and we made quite a noise together, but this led to what was my undoing, when a race down a country road and a loose mudguard bracket led to a write-off Yamaha 80 and two broken kneecaps. That ruined a latent sporting career and I'm still suffering today. Exit the Suzuki 50cc.

Not to be outdone, and in a gesture of parental defiance secretly I bought a Tiger Cub and kept it at a friend's house.

When I left home, I bought an Ariel Arrow. This led to serious big-time motorcycling with a bunch of good-natured "greasers" (anyone from Chester remember "Nemesis"?) with the Rock Concerts, the "runs" (no, not those runs, although I almost soiled my armour on more than one occasion - ed), the camping, the engines in pieces at the side of the road, the fresh air and a 650cc AJS and hair down my back.

We were all good mates but for a period of about 2 or 3 years we were all completely crazy. When I look back on the period 1971-1974 I start to tremble. The sight of Ray Stigter and I on his Velocette Venom 500 RRR 64 with the steering damper screwed right down and throttle screwed open while we were standing on the seat overtaking cars on the dual-carraigeway between Chester and Neston must have been frightening.

I still keep in touch with one or two of the bunch but there were several of our mates who arrived a good 50 years too early in the next world, like Keith Allman, Rance Glazenborg and Dave Jinks to name but three.

Eventually I did grow up and had the old man's CX500. That had to go when Laurence and I got together even though her daughter Roxanne would have loved to ride on the pillion (I taught her to ride a Honda Melody when she was 8!), and now I'm alone again I've a CZ 125 that I bought on a whim off Yahoo auctions for £395.

When you think about it, a bike is not practical, it's thirsty, cold, uncomfortable, wet, windy, but I'm still going to have a new Bonneville one day soon. Meantime, these Enfields look like something I remember from the days of my youth, and they're quite reasonably-priced too. And BMW boxers are useful for touring and going down to the Auvergne. But an FJ 1200 Yamaha would make an excellent long-distance machine. Now... er ...!

This strange hobby started many years ago due to certain financial restrictions when I dug out an old Reliant sidevalve van from someone's back garden in 1970. Ever since then I've had some kind of morbid interest in old cars. Not the veteran/vintage type, but just the ordinary family type thing that most people would throw away because it didn't have the latest accessory.

I contend that there's some considerable logic in this, because the fewer fancy electrical options there are in a vehicle, the easier it is to maintain. Many people "have a go" at me for this, running around in old polluting bangers, but firstly whatever emissions they pump out, it's certainly less than the emissions and waste of natural resources involved in making a new car, and secondly it is possible to make "near zero emission" cars by running on biodiesel.

My friend Paul and I used to spend weeks wandering around Europe with a biodiesel-powered Landrover and trailer pulling old cars out of hedges, such as the the Ebro. Unfortunately Paul has certain health issues these days, he's not as mobile as he was, and in any case my life has moved on from those days. Hence I mostly have to go a-wandering on my own, whenever I'm up to it. Which isn't as often as I would like it to be, either. In fact, as I write this in January 2010, it's at least 4 years since I "recovered" an old vehicle. Must do something about that!