I was on my way home from Montaigut, having been helping George move a couple of loads of timber. All day it had been cold, miserable and wet with this low hanging cloud that was stationary over the entire Combrailles.

So there I was, and all of a sudden, a small corner of the sun suddenly presented itself underneath the cloud. It was so impressive. Of course, the photo can't do the view any justice at all, but it was still well-worth taking.

This was another photo that was well-worth taking. Every so often I do some washing with my little tabletop washing machine. And what with the lovely day that we had on 23rd October, I did two machine-loads and hung them up to dry outside.

It's a cold-water machine but it works well enough, especially as I've worked out how to use it properly, but what surprised me was that the day was so hot and the sun was so intense (we had 75.7 amp-hours of electricity that day) that the clothes on the line began to steam. 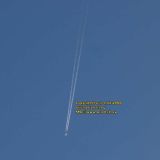 Where I live in the Combrailles, it's pretty quiet and nothing much disturbs me. But every so often there is a rumble overhead that makes me look up.

With being more-or-less directly due south of Paris Charles de Gaulle airport, from where there are many flights to Africa, I'm right underneath the flight path of the airliners going south. Many a time I've stood outside and watched two, three, four jets all heading southward. They never seem to go north though. The flightpath must be routed differently.

Even more interestingly, when the Americans were bombing Belgrade back a few years ago and flying from Britain, their big bombers flew directly over here at about 12-15,000 feet at about 22:00 at night. They would return a couple of hours later. Out of interest, and with nothing better to do, I'd go out and listen to them, and watch their navigation lights.

On one occasion, I was convinced that one less aircraft came back than went out, so I rang up work to ask them if they knew whether or not the Yanks had lost a bomber. I was told "shhhhhhhhhhhhh!". It was many months before the Americans could bring themselves to admit that one of their stealth bombers had indeed been shot down. I suppose that with it being "invisible", it had taken them that long to find it.

This next series of photos is going to make depressing reading or viewing, but Caliburn is having a little problem here. In actual fact, he's slid off the road into a water-filled ditch.

I went to get him out the same night but was beaten back by this most tremendous hailstorm, so I decided that this would be a job for next morning. I left Strawberry in charge of the proceedings (what an intelligent moose he is) and I retreated into the warmth, ready to do battle the next day.

You can see how deeply he's gone in too. Right up to the axle front and rear. What has happened is that this is where someone else went into the ditch a couple of weeks ago and their car undermined the bank. As I was driving past, the bank collapsed and Caliburn slid in.

A heavy jack or two, a few planks of wood, a couple of bricks. These seem to always work. But not today, unfortunately. I had Caliburn in a position where I could drive him out but everywhere was far too greasy and slippery and he slid back in, in an even worse position.

And out comes Caliburn, but by bit. A winch is quite a handy tool to have lying around.

I wasn't able to winch him out directly as not even I am strong enough to do that by myself. When you are on your own, the secret is ...
i....find a suitable tree or similar, diagonally opposite where you are stuck.
ii...attach the winch to the tree and the cable to the vehicle (or vice versa) and take up the slack on the cable.
iii..jack up the vehicle using a jack on wheels.
iv...As you do that, the cable goes slack providing that you have a decent diagonal angle, so take up the slack again.
v....slowly lower the jack. The cable, now being tight, won't let the vehicle go back into its previous position - it pulls it over to the tree a couple of inches.
vi...repeat as necessary.