February opened with a snowstorm. Luckily I was on my way from one OUSA meeting to another and in the company of another OUSA committee member, so a hotel room was in order, and we get rooms at certain Travelodges for a mere £29:95, ($60:00, €40:00) per night - cheap for a good hotel in the UK.

We were promised a good dunking overnight, and Talke Pits is renowned for snow, being the one of the highest points in Stoke on Trent. So I was pretty disappointed with this amount. I was half-expecting to have to shovel myself out of the car park.

As you know, I spend a great deal of time sleeping in my van, Caliburn, so I know quite a few useful lay-bys and keep a handy list in the van.

One of my favourites that I use when I'm travelling up and down the M1 is off on the A43 in the direction of Oxford. It's nice and quiet, sheltered from the main road by a thick hedge, and there is a handy wood for those of you who do not possess a plant-pot beichstuhl.

If you don't have the facilities to make your own coffee, a quick U-turn and short drive will take you back to the M1 and Northampton Services.

Another place where I spend a great deal of my time is at the National Archives, or Public Records Office, of the United Kingdom Government. This is situated in Kew, South-West London.

Apart from the obvious reason for being there, it's right underneath the flightpath for Heathrow Airport so there is always a good stream of aircraft going in to land. And you can take some pretty impressive pics.

I paid a flying visit to Morrison's in Reading to do some shopping and came across this rather unwelcome height barrier. It seems that the supermarket has banned vans on its carpark.

Apparently they have had a few travelling families setting up camp there. So I asked them that if they had one or two black people shoplifting in their shop, they would ban all black people from entering.
"No, not at all" was the reply.
"So why ban all van drivers from your car park then?"
"It's company policy"
"It's blatant prejudice and discrimination if you ask me"
"Well, every car park in Reading does it"
So I went and parked on the Maplins and Curry's car park right next door which doesn't have a height barrier.

I didn't go into Morrison's to do my shopping though. Definitely Fewer Reasons to Shop at Morrison's.

I bought an old Ford Escort van a while ago as I wanted the diesel engine to go into one of my Ford Cortinas. I'd had it loitering around on the car park of my apartment in Brussels for quite a while but everyone was having a really good whinge about it so I reckoned that I had better move it.

Consequently it ended up on the towing dolly heading in a farmwards direction where, if I have nothing else better to do this summer, I'll add it to the queue of vehicles that I am going to break for spares.

One thing about Caliburn is that with anything else that I've ever used for towing, It's always been a struggle to make normal progress at a reasonable road speed. Sometimes, it's been embarrassing, like when I used the Passat to tow that huge caravan loaded up with diesel engines and the like. Not so with Caliburn. He towed the Escort with ease, keeping to the 100kph (60mph) limit with no trouble at all, passing lorries and all kinds of things. It was ever so impressive.

And it was at an impressive 100kph that I was driving when a tyre blew out on the dolly - and blew with such force that it cracked the rim of the wheel. And with the high centre of gravity and the narrow wheelbase we had an extremely ... er interesting 30 seconds or so until I could bring everything to a standstill.

If you look just underneath the valve you can see the split in the rim. And that's the worrying bit. The other wheel is of course of the same vintage, so I reckon that the next time I'm in the UK, I'll go to Towsure and pick up a couple of new ones. And then I'll need to order some heavy duty tyres. Steel-banded, not textile ones. 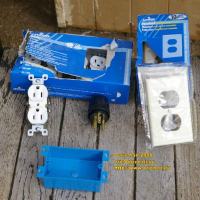 This pic is on here for my friend Rhys in the USA. I use American 110 volt fittings for my 12-volt electrical circuits down on 't farm. However I've yet to find anywhere in Europe where I can buy them conveniently, so I rely on friends coming and going to bring me the stuff over. It's easier to show people photos of what I need so that there isn't any mistake about what it is I need.

Rhys will be over here shortly and so this is the shopping list that he needs to bring with him. 30 each of these, please.