As part of my cunning plan to take myself out and about every Sunday, I was at a local Celtic music festival at St. Julien la Geneste at the beginning of August 2007. And during a break in the proceedings I went for a wander round and had a quick peep over the wall of someone's garden. And this caught my eye.

It's a primitive bird scarer made out of three old plastic water bottles, and it looks pretty effective to me. Mind you, there's always room for some improvement and the one that I designed based on this one is much more exciting and contains one or two innovations.

But it just shows you what can be done with a few old odds and sods lying around the place. 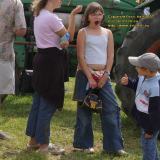 As I said, I like to get out and about every Sunday. And in this area there are plenty of rural activities such as vintage vehicle rallies, agricultural shows and the like.

This kind of thing is right up my street and I like to visit as many as I can, and easily the most well-known is that at St. Maurice-prês-Pionsat in the middle of August. But as you can see, my enthusiasm for these events isn't shared by everyone.

What with people having thrilling times at Autocross events in the area too, you can see that the Combrailles is a hive of activity and excitement.

Sooner or later I'm probably going to have to set up a web page featuring trains (or locomotives, more like) as I'm picking up quite a few pictures on my travels.

On my way up to Caen I pass an old single track line, and much to my surprise at the end of August I had to stop at the level crossing as a train was wanting to use it. I've never seen one on here before.

According to my Jane's Train Recognition Guide

, it's a Class BB63500 diesel locomotive, one of the 580 introduced by the SNCF from 1958 onwards. This is one of the most numerous classes of locomotive on the SNCF, and you are likely to find them almost everywhere on the system.

There's a huge terrorist scare going on in the UK right now, and I'm convinced that the British government is making up most of it, and deliberately inciting the rest.

And of course you may well be wondering what makes me so sure of this. Well, here I am on the ferry from Ouistreham in France to Portsmouth in the UK. There is little control by the UK immigration authorities in France, as you might expect, and the customs check is of course on the Uk mainland at Portsmouth. And in order to get there, you have of course to be on the ferry as it manoeuvres itself into the harbour - right through the middle of the Royal Navy dockyard.

Yes, any would-be terrorist with a radio-controlled helicopter or two could put out of action half of the British fleet in a matter of minutes without too much effort. And "they" are worried about hand-luggage on aircraft.