Having slept the sleep of the dead, next morning - my last morning in the USA - I had to be up nice and early yet again. And I didn't disappoint myself either. While I didn't have as much to do as the previous day, I had much less time to do it.

You can see from the photo (taken from the edge of the motel car park) that the motel is right by the Interstate. Just as well. What with my itinerary already being so far up the spout, I needed to slip out of the motel and head north fairly quickly.

Such was the plan anyway, but it seems that everyone else had the same plan, what with all the early morning rush-hour traffic heading to Washington DC.

Never mind. 20 miles or so saw me turn off the Interstate and head northeast. This was taking me towards another place that I'd been nearly 40 years trying to reach - Manassas and the Bull Run battlefields.

Now, you're probably wondering about all the text for some of the above pages, and how it isn't particularly oveflowing with anecdotes as is my usual practice. Well, to tell the truth, we had a kind of disaster.

Like stepping out of the car at the Bull Run battlefied visitor centre at the northern edge of town, dropping my dictaphone, and a piece of plastic breaking off and slicing right through the tape. It's beyond my capabilities to repair a microcassette so I've had to send it away to be fixed. Meantime, I'm having to do the best I can until the tape is fixed. Then I'll go back and write it all out again. Failing that, of course, I'll have to do the trip again. 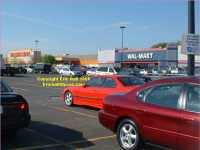 The people at the Visitor Centre put me right and pointed me in the direction of the nearest Walmart, which by pure coincidence is next-door to a Home Depot. You know of course that I like Home Depots, and you know why I like them, so this is my idea of paradise, what with a Home Depot next to a Walmart.

So, fixed up once again with a tape, it was back to the Bull Run battlefied visitor centre, but not before stopping at a petrol station to fetch some coffee. And here was an extremely whimsical moment - some Spanish truck driver came in asking for directions, and there was only me in the whole service station (and it was a pretty big place I can tell you) who could speak any Spanish to help him out. That was a feather in my cap. It made my Spanish course all worthwhile. 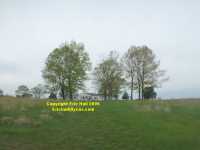 So this is the distance is the Manassas - Bull Run Visitor Centre up on Henry Hill to the north of the city. I spent much more time than intended up here or hereabouts, and that was rather unfortunate as there were many other sights I had intended to see. I'm not going to have time to look at the vintage car and aircraft museum at Manassas, that's for sure. That will have to be for another time.

There were several particular things that fascinated me about the battles here.

Firstly, the fact that there were two battles so close together. I had encountered this so often on my voyage that it must have been more than coincidence. There were several battles at Fredericksburg. Then Cold Harbor in 1864 is within a 10 minute walk of Gaines Mill in 1862. From Chancellorsville of 1863 to the Wilderness of 1864 is just a short drive. Even more confusingly, during the Peninsula campaign of 1862 a battle was fought at Yorktown, the same Yorktown at which Cornwallis surrendered in 1781.

The second thing is that even though the two battles here at Manassas took place within 14 months of each other, the tactics were light years apart. The first battle was a typical medieval affair. Two armies confronted each other across a compact open field. The second featured armies digging in, flanking movements, artillery barrages - all the trappings of modern warfare.

I talk at great length about the battles at Manassas elsewhere so I won't bore you any further. But it has to be said that the Civil War is a fascinating study of the evolution of warfare and tactics. The war started off by medieval armies confronting each other on open fields and moving under open artillery as they had done since the dawn of time. By the time the armies confronted each other at Petersburg in late 1864, they had developed trench warfare, mining and sapping, just like in Flanders in 1917.

People often ask me what is the fascination I have for the American Civil War. Well, everyone in the whole wide world should have a profound interest in the American Civil War. The idea of American soldiers killing other American soldiers, torturing and starving American prisoners-of-war in places such as Andersonville, ill-treating American civilians and wantonly destroying of American property - well that simply has to be appealing for the 96% of the world's population that doesn't live in the USA, hasn't it?

A significant proportion of soldiers who fought in the Civil War was not American by birth or inclination. These soldiers were probably blessed with the gift of foresight. I propose that the Americans re-enact the American Civil War. There would be millions of volunteers from all over the world rushing to the colours with the aim of doing some looting, pillaging, mass murder and wanton destruction on American soil. Revenge is a very powerful motivation. Abu Ghraib totally redefined the definition of "The Dogs Of War".

One thing that it is useful to know is that more American soldiers were killed in the Civil War than the combined total of those killed in all other wars that the USA has fought since then, up to and including Vietnam. The figures are something like 630,000 to 622,000.

It is quite significant that they stopped at the Vietnam War, because the number of American soldiers killed in The War To Steal Iraq's Oil is going to push the total over the top by a country mile before they decide that the game isn't worth the candle, give up and grow oilcrops.

One suspects that they haven't included the casualty figures in The War To Steal Iraq's Oil to date in the total figure above, even though it still brings out the total as less than those killed in the Civil War, is because those in authority know full well that the total is going to eventually push it over the top, and it saves them the embarrassment of having to publicly correct them later.

But on the Manassas battlefield, I had my own personal disaster. And I'm not talking about the tape either. As I was walking up the hill across the grass from the Confederate lines to Rickett's guns, I felt a tug on my foot. So looking down, I found that the stitching on my shoes had come apart. This was a tragedy.

I'd had these shoes for years, and they were the most comfortable pair I'd ever worn. There would never be another pair like these again. It was a good job I was on my way home. If I were staying any longer, I'd need to buy a new pair.

So that was that. I had about an hour left to catch my plane. And then of course I remembered the Air and Space Museum near to Washington Dulles Airport that I had encountered upon my arrival. I remembered that I had the idea to go there on my way back for a visit. Well, that's another thing that will have to wait for another day.

Following the track of the retreating Union Army from 2nd Manassas, I arrived in Chantilly, the town outside which they made a stand to halt the Confederate advance party that was pursuing them. I was hungry and I wasn't going to stand for that. It was late and I had eaten nothing since breakfast. And if you know the usual story of my flights, the chances of getting my vegan meal are remote to say the least. A local supermarket came up trumps with a few bread rolls and a box of mixed salad, together with the ubiquitous root beer. The last I was going to drink until my next visit. From here, it was a quick thrash down the road to the airport.

I cleaned out the car (those who know me will know that that is an effort in itself) and handed it in, making a note about the CD player. Then, struggling with my luggage (because I had accumulated quite a bit by now), I made it back to the terminal.

Handing in my luggage was an adventure in itself. I recall all sorts of hoops I had to jump through to have my luggage registered and x-rayed before they would let it onto the plane. All the cable, plugs and electrical bits and pieces I'd bought from Home Depot and the blades I'd bought from Lowe's at Elizabeth City for my alligator saw - made me the subject of some intense scrutiny and interrogation, I can tell you.

But the problem with the Zionist apologists that are currently running the USA and the UK is that in their haste to do anything they possibly can to crush Islam, they have taken the lid of Pandora's box, and it's doubtful if they are ever going to be able to put it back. Ohhh for some real Christians - those who follow the teachings of Jesus. Peace, love, and forgive those who trespass against them. Where have all the Christians gone?

It is just totally crazy to me that Christian extremists such as Opus Dei and the like would want to get into bed with Zionists in order to crush Islam, when one considers the problems that the Jews and the fundamentalist Christians have had with each other throughout history.

It has to be remembered that Islam lived quite happily in peace with Jews and Christians until the British made such a mess of Palestine in 1919 and 1920. Still, the Americans quite happily armed the Soviet Union during 1941-45 and by doing so laid the foundations for their own confrontations for another 45 years, so this story of the Americans backing the wrong horse in an international conflict has a long tradition. American foreign policy is one of reaction, not action. They fall for it all the time and never seem to learn the lesson. 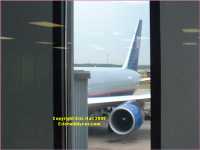 After all of this, I was exhausted. I'm a very bad air traveller and I get so easily stressed out when I'm waiting for the plane. All of this passport control and luggage check and the like play havoc with me. It's quite a recognised phenomenon amongst many people, yet I'm truly surprised that airport staff aren't trained to recognise it and deal with it appropriately, and that airports are laid out and decorated in such an aggressive style.

I was just glad to sit down with a coffee and contemplate my aeroplane. It was quite a nice one, as you can see. Much nicer than the flying chavmobile that brought me out here all that time ago. At least this one looks as if it might actually get across the Atlantic in one piece instead of being held together by duck tape and go-faster stripes.

You know, I was so stressed out by this time that I remember nothing at all of waiting for the plane, and even less of the flight back to Brussels. I just fell out of the plane at Zaventam and made my way quietly home.