The drive from the Virginia state line into Petersburg passed pretty much uneventfully, but I could feel that the light was slowly starting to fade as I pulled in to town. First thing to do was to go to visit the town. The motel could wait until later.

Now I talk ad nauseam about Petersburg on my Civil War pages so I'm not going to bore you too much here with stories of the war. Instead, we'll just talk about the town and its history.

There was a scattered European settlement in the valley around here from quite early colonial times, and its growth led to the formation of the parish of Bristol in 1643. Following attacks on the settlers by the Powhattan Indians under Opechancanough in 1644, Abraham Wood constructed Fort Henry here on the site of a native American village and later set up a trading post. Wood's son-in-law, Peter Jones, continued to expand the European presence here and in 1733, Colonel William Byrd set out the plans for a town on the site of the fort. It is suggested that the name of Petersburg reflects that of Peter Jones, although the city was originally known as Peter's Point.

The rapid growth of the city was due to its role as a trans-shipment point for goods. Petersburg marks the limit of the coastal plain, and just upstream are the foothills of the Appalachians. The underlying rock of the coastal plain is much softer than that of the mountains, so the river has worn it away to a greater extent. The result of the different rates of erosion is a waterfall that presented a formidable barrier to navigation. Water traffic can go no further than here, so the boats that brought manufactured products to Petersburg from the industrial centres took away the agricultural produce such as cotton and tobacco that the farmers had carted here.

The British army targeted the city in 1781 and took it after a vicious little fight on 25 April of that year. However, the Virginia State Militia slowed down the British so much that Lafayette's regulars were able to secure Richmond against attack before the British could reach it. During the War of 1812, the young men of the city marched proudly away to fight at the battle of Fort Meigs on May 5th 1813, with rosettes in their caps. This is the origin of the nickname of the "Cockade City".

The next 50 years saw the wealth of the town increase immeasurably, and a considerable number of public works were undertaken. 1813 saw the commencement of the paving of the streets. Subsequently, a canal was built to by-pass the falls. The city became a major railway hub for much of Virginia and North Carolina. When the Petersburg and Weldon railroad linked the city with Wilmington in 1840, it was the longest continuous stretch of railway anywhere in the world. Gas lighting arrived in the town in 1850, and a municipal water system was installed in 1857. This period also saw it become a major financial and banking centre.

It was obviously the place to be, for in 1850, the townships of Blandford, Pocahontas and Ravenscroft agreed to amalgamate themselves with the City of Petersburg.

Petersburg has a great deal going for it for the Civil War buff. Although this wasn't the original target of Grant's Overland Campaign of 1864-65, it nevertheless became the ultimate destination of his advance, and it was all around here during the siege of almost 300 days that many crucial battles of the Civil War were fought. And it was these battlefields that had brought me here. 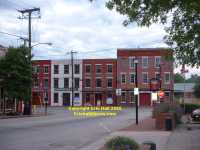 The first thing that you notice about Petersburg is that almost all of the buildings in the centre of the city are made of brick. This is quite a contrast to many cities in this part of the world. On 16th July 1815, the old wooden buildings around the wharves of the Appomattox River caught fire. By the time the conflagration was extinguished, more than 350 wooden buildings had been burnt to the ground, at a cost of over 3 million dollars. This prompted many owners to decide against rebuilding in wood. In fact, in the next two years, some 300 of the buildings had been rebuilt using bricks.

You can see here in this photograph and the one below just what a good job they made of the city following the fire. It's clearly an American city, but there's a lot more "class" about it than you would expect. 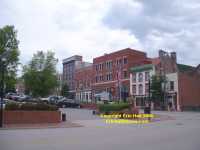 These photographs were taken from the city square near to the old market place. This would be effectively the city centre, I suppose. It's really nice to see the diversity of buildings here. Normally, most cities would have replaced them with some kind of unitary department store type of shop front which would be their idea of progress.

Now I'm not sure exactly what happened here or hereabouts, but those of you who know me will understand that I'm someone who is very susceptible to atmospheres. It was round about here that I started to have a really uneasy feeling about something, and I wasn't sure what it was and I wasn't sure why I was having it.

It's the kind of feeling that you get when someone is walking over your grave, or when you're being followed down a road by an unmarked police car. Rather like the famous Arthur Hunnicutt

"kind of feeling that I get when there's an injun around and I can't see him". I don't have these feelings very often, yet when I do, I am usually proved right. I felt that this wasn't the time to be hanging around in the gloom displaying a camera and a dictaphone, and I started to spend a more-than-reasonable time looking over my shoulder as I walked around. 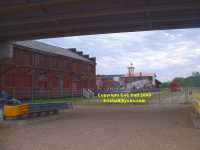 From here, I walked back around the square to the South Side Railway Station. This was built in 1854 and is the oldest railway station in Virginia. You can see from the photograph here on the left that the railway lines don't pass through the station any more, but are off maybe 50 yards to the right of where I'm standing as I took this photograph. Just behind me is the modern railway station of the Norfolk and Southern Railroad.

Why this railway station is significant is that it is from here that Lee's retreat to the Shenandoah Valley began, the event which marked the abandonment of Petersburg and Richmond by the Confederate armies and the collapse of resistance on the eastern seaboard. I was going to be here tomorow as I was intending to follow in the footsteps of Lee on his fateful march via Sailors Creek to Appomattox. 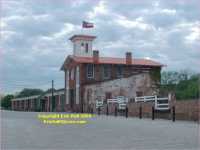 This building is really quite interesting. It is in fact the old station offices. The building has been derelict for many years and many people feared for its safety, particularly after a tornado whipped through it in the mid 1990s. The right-hand wing of the building was totally destroyed, as you can see in the photograph here on the left, and well over 3 million dollars worth of damage was caused. However, some rich local dignitary by the name of William Patton bought it and donated it to a preservation society, which is now actively engaged in renovating it.

The renovation of the building, although proceeding rather slower than everyone might have wished, has revealed a few surprises. Although the building has been reroofed at some point, the wooden trusses are without doubt the originals, and many bear traces of shell damage from Union artillery during the siege. In fact, there are two beams that have round holes where shells have passed clean through them 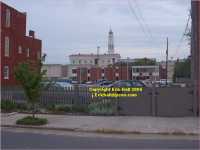 From the railway I walked up the hill to where I could take a good picture of the magnificent courthouse tower. This is what I call impressive.

The courthouse itself was built in 1840 during the period when the city was spending its wealth on impressive public works. It was designed by Calvin Pollard, a New York architect, with features that represent a curious mix of Greek and Roman styling. If you look closely at the enlarged version of the photograph, you will see the tops of the columns that give it the air of some kind of Greek temple. These unusual features have led to it being listed as a building of historical interest since 1973.

There is no truth in the rumour that Calvin Pollard received assistance in its design. It is definitely all Pollard's, if you ask me.

My route back to the car took me through several car parks of the "London bomb site" variety. It was clear to see that the city must have been honeycombed by little narrow alleys and impoverished buildings until some kind of demolistion programme took place here. The city makes a great play about its historical wealth, but I bet there was a great deal of historical poverty too.

So, that was the historical bit. From here in the gathering gloom, it was time to sort out a motel.