Crossing back over from Roanoke Island and arriving back at Whalebone (for that is indeed the name of the town just around here) it was a right turn and once more onto the Historic Albemarle Highway heading southwards in the direction of Ocracoke. Now Ocrakoke is all of 71 miles away, and with a ferry ride in between. This is where I'm aiming for and where it looks like I shall be staying the night, as the ferry back to the mainland, all three and a half hours of it, will have long gone by any time I'm likely to arrive. 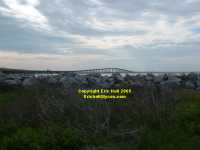 About 10 miles south of Whalebone I came to yet another magnificent bridge. This one is the Herbert C Bonner Bridge over Oregon Inlet onto Pea Island, and it dates from 1963. It's a typical island bridge of the type that you would expect to see around here if you've been keeping up with my journey. It has the typical tall arch in the middle to let tall ships pass, and the typical long causeway either side. In fact the causeway is in total 3 miles long and it felt like the longest bridge crossing I'd made all holiday.

In case you are wondering (as I am sure you are), Herbert C. Bonner is no-one other than some local North Carolina politician or other who served in Congress for 25 years only to die at his desk. From what research I have been able to do, he has no other claim to fame.

And it's not as if his bridge is going to outlast him by much, either, as it is falling down. Despite the fact that it won an award when it was constructed, it was actually built on shifting sands that are moving on average 75 feet west and 16 feet south every year. North Carolina is spending in some years as much as $1 million annually just to maintain its integrity. A survey has been undertaken to build a replacement bridge, and the only safe way to ensure a stable structure is to build one a whopping great 17 miles long and costing $260 million. This is just, by the way, for an estimated lifespan of 75 years, or three and a half million per year. Oh for a Thomas Telford or an Isembard Kingdom Brunel.

It goes without saying that the two "c" words are associated with this project - "costly" and "controversial". If the USA keeps on pumping out the pollution at the rate it's currently pumping, and thus the polar ice caps keep on melting at the rate they are currently melting, the new bridge becomes totally irrelevant because the Outer Banks will have submerged due to the rising sea levels long before the 75 year time scale has expired. They may as well save the money and keep up the repairs until the islands disappear. If you think I am exaggerating the scale of the problem, then just wait until you read further on. Even so, you will see that I even have a way to deal with this problem.

There was a really unusual type of dredger passing underneath as I was driving over, but there was no way I could take a good photograph of it as the bridge rails were in the way. The nearest parking is a long way from the bridge and this was a shame. A few years ago, a dredger such as this collided with the bridge and caused millions of dollars worth of damage before sinking. I was hoping that this one might do the same. Nevertheless, there was an excellent view of the bridge from here, so I made myself a sandwich from whatever I had bought at Food Lion, went for a walk around, and took a few photos.

Pea Island, by the way, is apparently just one big nature reserve, all 6,000 acres of it. Someone, with obviously nothing better to do, counted 365 species of bird sheltering on here. I can understand why people other than "twitchers" come here on holiday, though. While I was eating my lunch (at three thirty in the afternoon) I was having a wander around and I can tell you that the sand is really beautiful just around here. 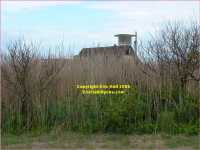 Just across the sands from where I had stopped were some abandoned buildings, which you can see in the photograph just here on the left. I've no idea what buildings they are or might have been. I did hear that there was some kind of lifesaving station on the island (what with all the shipwrecks around here that would hardly be surprising) but there was no evidence that this was it, or anything else to say what it was.

However, you can see why they are abandoned. What with the sands shifting 75 feet west and 16 feet south on average every year, the place has been overblown by a sand dune. me if you can tell me what functions these buildings served

Now, talking about that ships that ran aground and sank, this whole area is absolutely teeming with them. Ship after ship after ship ran aground here and was wrecked. Hundreds of them. There's even a ship's boiler on the beach just along from here (and I'd wish I'd have known that while I was actually eating a sandwich just a few hundred yards away from it) and a sunken U-boat just offshore.

What with prevailing on-shore winds, dark nights, poor lookouts and all the rest of it, this could be a really serious place to come for some good shipwreck hunting. I can see me going to do some serious research into this.

Lunch being over, it was back into the car, and on with my journey southwards again. Listening to the radio, I was intrigued to hear adverts for vehicles for sale here in the States being sold on the basis of their fuel consumption. That was certainly interesting, and marks quite a considerable change in traditional American attitudes.

But then again, I'm tired of pointing out to Europeans that the image they have of Americans is in many cases merely a caricature or something that is 30 years out of date. I do recall being at a meeting of the allegedly environmentally-friendly Open University Students Association in September 2005 at Wyboston Lakes, St. Neots, where the air conditioning was belting out so powerfully that everyone in the room was freezing to death. The response of the chairwoman, Joan Jones, was to open a window to let some heat in. The idea of turning off the aircon never even entered her head.

A short way down the road just before Rodanthe is the township of Mirlo Beach, named after the British oil tanker Mirlo, which was torpedoed by a German U-boat in 1918 just off the coast around here. 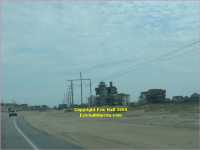 You can see from the photo here on the left (yet another one that was taken on the move) that there are some really weird-shaped houses along the coast just here.

Another thing there is just here is a live streaming webcam of the road. It's not working very often but try your luck. Click on the link and see if you win a prize. You are certainly having your money's worth on my site, that's for sure.

By the way, did I talk about money at all?

One thing I did talk about a couple of minutes ago was lunch. It's only fair, and probably a good idea (I hope you're not eating, by the way) to point out that if you are a carnivore you will never go hungry on Pea Island. I cannot think of anywhere else where I have seen so much roadkill as I saw along here on the Outer Banks on my way to Cape Hatteras. I wouldn't have thought there would have been so many animals, what with the sparse habitat and extensive human settlement.

Further down the coast I came across a whole bunch of people in the water engaging in a sport that resembled waterskiing but instead of being towed by a boat, they were being towed by a kind of kite or parachute. I don't know what you would call that kind of sport, and I've never seen it done before so I wouldn't be able to explain what the sport was, but it was certainly popular. I'm just wondering why I never took a photograph of it either.

Now the next stop on this marathon adventure was a mere 15 miles down the road southwards from Rodanthe. And this was the third of my fourth good reasons for being out here (in case you're wondering, the fourth is the ferry ride back to the mainland - all three and a half hours of it). Yes, it's the world-famous Cape Hatteras lighthouse.