If anyone asked me about my dream car, then without doubt it would be a Pinto-engined Mark III Cortina (and I groan when I think of the dozens I cut up in the 1980s), and preferably a 2-litre.

If it were a 2000E, even better, but then let's not be greedy, I already own one of them thanks to Nerina.

Mind you, if it were a 2000E estate, it would be a dream come true. But I used to tell myself not to get carried away by thoughts such as this. The chances of finding one of those anywhere about was somewhat remote.

The old ones had an alarming tendency to fold up just behind the rear doors and there haven't been any new ones made since 1976.

The chances of finding a Cortina Mark III estate of any description today at a price that I could afford were about nil if not even less.

Consequently when back in the late summer of 2002 eBay announced an auction for a 2000E estate in need of restoration, there was absolutely no question about it. It was going to be mine. 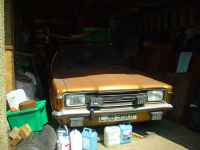 I daren't tell you the maximum bid I placed on it, or how much I paid, because you'll all think I'm totally crazy, and you'll probably be correct as well, but who cares? There'll never be another one like this for sale again.

So after a nervous night sweating over a red-hot auction, it was finally knocked down to me, and we were in business.

Next time I was in the UK I came home via Swindon, and Paul and I, with Alan, the very friendly previous owner, pulled it out of its home for the past 8 years. 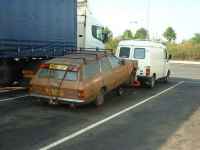 Having replacing the doors that had been taken off and blowing up the tyres, we winched it onto the dolly. And once we had blown up the tyres on the dolly, we were in business. Off I set in the general direction of Dover Docks.

At Clackett Lake services, for the want of anything better to do, we

And badger me if it didn't fire up

So, with 4 litres of fuel in the tank, and a bit more for good luck down the inlet manifold, it fired up and ticked over. Smoke everywhere and sounding just a little cammy like any other old and tired Pinto engine, but never mind - it was running. 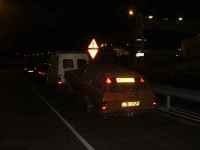 Paul went home and I set off for Dover Docks and the Norfolk Line ferry at 01:45 to Dunkerque. After a short wait, I made my way across the Channel and set off for the final lap to Brussels.

A flaming enormous traffic queue on the E40 near Alost meant I didn't get back to Brussels until 07:30, about 24 hours after I'd woken up, and nearly 21 hours on the road. I was absolutely shattered. 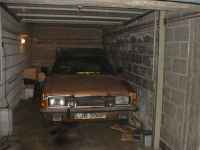 But no worries. Now that we had had the engine was running, all I needed to do was to drive it off the dolly.

The LDV wasn't too happy at all about the load it was pulling, but then again with a Perkins Prima engine under the bonnet, who could blame it?

Nevertheless it pulled it 282 miles back to Brussels without mishap so I can't complain too much, I suppose (although its motor did explode quite spectaculary a couple of weeks later when I was on my way to the airport).

Mind you, I was glad the LDV was running on colza - it would have been a VERY long night if I had been running on pump diesel.

That was going to be an easy way to unload it. But how do you drive it off the dolly when the clutch is seized? Well, you put it in reverse and turn the engine over on the ignition key.

After about ten seconds, a loud clunk meant the clutch was free but now the wheels were stuck solid in the dolly. So trolley jack underneath to raise up the front end, and off we went and it drove down the ramps.

This was when I discovered that the brakes didn't work.

But of course this is why God invented handbrakes and ignition switches, and after all I'd done for the last 17 hours, driving 200 yards without brakes wasn't going to defeat me.

> By the time 09:00 rolled around, the car and the towing dolly were in the garage, the LDV was parked up, and I was in bed.

Interestingly, after a good 10 minutes tickover, the engine was no longer smoking. The idea that was going through my mind at Clackett's Lake of using the Cortina to tow the dolly with the LDV aboard maybe wasn't so crazy after all.

But if you remember the 2000cc engine and 5-speed box I took out of the gas-powered Granada - no prizes now for guessing where that will be going.

So that was where the 2000E lived for eight and a half years - quietly and on its own in a garage.

But things changed dramatically in early 2011.

I had been spending more and more time down on my farm in France and going back to Brussels once every 6 months or so to catch up on the correspondence.

But soaring house prices, a severe winter and a friend in the building trade looking for dry warm work caused us to come back and blitz the apartment ready to sell it.

With a new battery on it, then to everyone's surprise including mine she fired up almost straight away.

Driving it out of the garage was certainly exciting because the clutch had seized to the flywheel, and one day I'll talk more about this when everyone has calmed down and the end of the period of Statute of Limitations has been reached.

And as if that wasn't enough, with a seized clutch made it even more exciting getting it onto the trailer.

Towing it down through the night to the farm just here was no real problem with Caliburn, the LDV replacement that I've owned since 2007 and now I'm clearing out the rubbish in the barn to make space for it.

It's high time I had a real workshop here in France where I can do things properly and this is the impetus that I need.

There are some more photos of the 2000E.